Suzuki confirms their pull out of MotoGP

Suzuki have finally confirmed what the rest of the Motorsports world was already talking about for weeks, its departure from the world of MotoGP until at least 2014 with the Japanese manufacturer citing the world economic situation and the bombardment of the country and surrounding Asian continent by natural disasters as the reasons for what it is calling a ‘suspension’ of its MotoGP activities.

The company was given a deadline of 11th November by Dorna boss Carmelo Ezpeleta to confirm its participation next year but as that date came and passed without Suzuki making an announcement, the rest of the MotoGP paddock waited anxiously for a statement from the team. They didn’t have to wait for long after the company confirmed to the word on its website that it would not contest MotoGP for at least next year or in 2013.

The statement reads, ‘Suzuki Motor Corporation has decided to suspend temporarily its participation in FIM Road Racing Grand Prix MotoGP from 2012. This suspension is to cope with tough circumstances mainly caused by the prolonged recession in developed countries, a historical appreciation of Japanese Yen and repeated natural disasters. 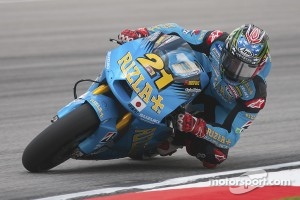 ‘Having an eye to returning to MotoGP in 2014, Suzuki will now focus on developing a competitive new racing machine for that class. Suzuki will continue motocross racing activity and support of road racing activities using mass-produced motorcycles, by obtaining FIM homologation and co-operation with the supplier of its development racing kit parts.’

The Suzuki team was one of the longest standing in top class FIM Motorcycle racing and first entered the World Championships in 1960 with the team celebrating 60 years of racing in the top class last year. During this time the team has totalled a figure of seven constructor championship titles and helped 5 riders to six titles: Barry Sheene, twice 500cc World Champion (1976&1977), Italian’s Mario Lucchinelli and Franco Uncini (500cc 1981&1982 respectively) and Americans Kevin Schwantz (1993 500cc) and Kenny Roberts Jr (2000, 500cc).

Suzuki did have a break from MotoGP before when the manufacturer pulled out of the World Championships between 1983 until returning in 1987. Speaking about the latest withdrawal, Team manager for the Rizla Suzuki Paul Denning had been trying for some time to convince management in Japan to continue to race, however all the attempts were unsuccessful and was apologetic but optimistic when making an announcement on his Twitter page: “It's now - very sadly - official. Suzuki is out of MGP for 2012/13. I'm sorry for all the guys on the team, our partners, friends and fans. Really thought we'd pulled it together - Silver lining is that Suzuki has expressed its clear intention to come back in 2014. Thanks to all.”

Ducati Team heads to Argentina for next MotoGP round