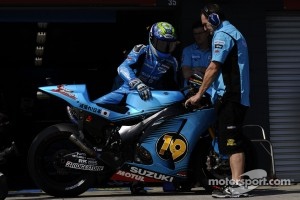 Álvaro Bautista and John Hopkins began their preparations for Sunday’s Malaysian Grand Prix with a positive performance from both at Sepang today.

Bautista (P7, 2’03.123, 33 laps) was never outside the top-10 in either session today as he carried on with the impressive form that he showed last week at Australia. He tested the two tyre compounds available to him for this weekend, as he worked with his crew to find the best configuration for his Suzuki GSV-R around the 5,543m Sepang circuit.

Hopkins used both of today’s sessions to re-acquaint himself with a MotoGP machine as he joins Rizla Suzuki for a wild-card ride in Malaysia. His best time of 2’03.885 from his 28 laps today was good enough to give him a respectable 14th in the classification. Hopkins is sure he can make improvements tomorrow and convinced he can progress further up the standings.

Today’s sessions were held in the hot and humid conditions that are so commonplace in Malaysia. The fastest time was set by Dani Pedrosa on a Honda.

Rizla Suzuki has one more free practice session tomorrow morning followed by an hour of qualifying in the afternoon when Bautista and Hopkins will be going all out to get the best grid positions for Sunday’s 20-lap race.

“Today has been quite a good day for us and I am in seventh position, which is not too bad for a Friday. This morning we tried a different setting on the bike, similar to the one we used in Australia, and we preferred that one so we carried on with that this afternoon. We continued with the soft tyres we had been using this morning during this afternoon’s session and I did more than race distance with them, and the rhythm felt good. In the middle of the second practice I tried a harder rear tyre, but I didn’t feel too much initial grip and it didn’t give me as much feedback as the softer one. We have got some good information on the tyres now and I think we will use the softer one for the race, if the conditions are similar to today. I will try to improve tomorrow in FP3 and then get a good lap in qualifying, so I am in the best possible position for the race.”

“Today has just been about getting comfortable on the bike and building my confidence back up to be able to ride a MotoGP machine. My main thing was getting the confidence in the tyres, because unlike at Jerez and Brno, where the tyres gave me a good feedback and I was able to get used to them straight off the bat, here with the temperatures and humidity I am spinning up a bit and struggling a bit with rear grip. It’s probably not so much struggling as getting used to how it’s working and getting the bike picked up at the right time out of the corners. I feel quite strong in some of the parts of the track, but coming out of some of the corners I’m not quite where I want to be, which is mostly due to my rider technique and getting back on terms with the bike. The day wasn’t too bad for us, but I think we can improve a lot tomorrow. I will think about the track tonight and I’m looking forward to the rest of the weekend.”

“The first day at Sepang and it has been great to see two Rizla Suzuki out on the track! John’s been through a lot physically in the last couple of months, and that combined with the shock of the way the MotoGP bike works compared to the Superbike, held him back a little bit today. I am sure that with a good night’s sleep he will be quite a bit closer to his best tomorrow.

“Álvaro’s pace is better than his position, he equalled his best lap with race distance on the tyres and I think he can go a lot quicker tomorrow. The GSV-R is working well and if everything goes in the right direction I think Álvaro has a chance to fight for the podium on Sunday.”