Third row for Bautista at a sweltering Sepang 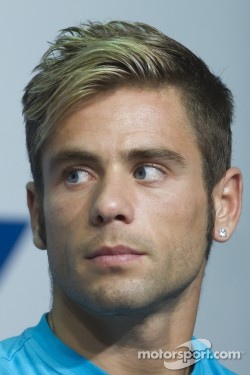 Rizla Suzuki’s Álvaro Bautista will start tomorrow’s Malaysian Grand Prix from the middle of the third row after qualifying in eighth today.

Bautista (2’02.332, 22 laps) has been consistently in the top-six all weekend and occupied a front-row grid spot with less than a quarter of the qualifying session remaining. He put in a fresh softer rear compound tyre to make an attack and consolidate, or better, his provisional position, but got held up in traffic and couldn’t find a clean lap - while other riders capitalised and produced better times. Despite being on the third row, Bautista’s race pace is very promising and a good start in tomorrow’s race could easily see the Spaniard running with the front group.

Tomorrow’s 20-lap race will see Bautista as the lone Rizla Suzuki representative after wild-card entry John Hopkins had to withdraw from the event due to complications from a broken finger that he suffered earlier in the season. The main event tomorrow will get underway at 16.00hrs local time (08.00hrs GMT), when Bautista will be going all out to try and secure his best finish of the season.

“I'm not very happy with the position, because all weekend we have been in the top-six and that's what I expected this afternoon. We have a good rhythm compared to some of the other riders and when I put the first soft rear in the bike to make a fast lap I did it alone and I got up to third position. On the last tyre I tried to follow some riders to try and get some tenths to make sure I got at least on the second row, but I didn’t find anybody and also didn’t concentrate enough to do a lap by myself. I am happy with my race pace and the feeling from the bike, but I’m not pleased with my position on the grid. Tomorrow will be a hard race because with these conditions it’s always difficult here. During practice you can always do one fast lap and come back to the box, but in the race you have to be consistent and go for it for 20 laps. I’ll try to make a good start and stay with the group like I did in Phillip Island and see what happens. Today it was possible to be on the second row, but now I need to focus on the race and use all my energy tomorrow to get a good result.

“When you have a small problem, sometimes the problem can become big and I think that is what has happened to John. It has been a big disappointment for everyone, because in the Czech Republic and here we should have been two riders, but he has not been able to race at either event. It is very bad luck for him and I wish him a quick recovery and I feel really sorry for his situation.”

“We didn’t reach our potential in qualifying today and that was disappointing. Álvaro looked to get in behind one of the fastest guys on his last run, but in hindsight that worked against him. It would probably have been better for him to find some clear track and build his rhythm. That said, the middle of the third row is not a disaster and our race pace looks pretty strong. The GSV-R seems to be quick on its first timed lap, so if we can elbow past the traffic straight away tomorrow, it could be an interesting race.

“Words can’t really express the disappointment that whole team feels at John’s bad luck. It would have been special to have two Rizla Suzukis in the race tomorrow, but we can’t change the situation. John requires urgent surgery and lots of rest to get his finger properly repaired and fully operational again. He’s had some bad luck, but he should be proud of everything he has achieved in 2011.”