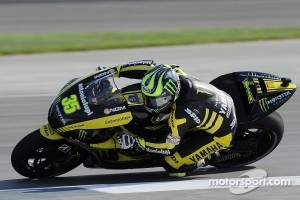 The Monster Yamaha Tech 3 Team heads to the Twin Ring Motegi track this weekend determined to deliver strong results in front of a large contingent of Yamaha fans at the re-scheduled Japanese Grand Prix.

British rider Cal Crutchlow is eagerly-anticipating his first chance to compete in Yamaha's all-important home Grand Prix after he scored a thoroughly deserved ninth position last time out at the Motorland Aragon in Spain.

The 25-year-old has made big advances in improving the set-up of his Monster Yamaha Tech 3 Team YZR-M1 machine in recent weeks and he is looking forward to testing his skills on the 2.983 miles Twin Ring Motegi track, which is dominated by a series of hard braking an d acceleration points.

American team-mate Colin Edwards is determined to return to the form that has made him the outstanding non-factory rider once again in 2011.

The popular 37-year-old was uncharacteristically outside of the top 10 in the previous two races, but the Twin Ring Motegi race gives him the perfect opportunity to show the speed that established him as a consistent top six contender earlier in 2011.

The Japanese venue was a happy hunting ground for Edwards last season, the long-serving and loyal Yamaha rider racing to a season best fifth position. He's qualified in fifth place on the grid in the past two seasons and he's optimistic of mounting another top six challenge with seventh place in the World Championship standings still an achievable goal.

This weekend's race was originally scheduled to take place on April 24, but an earthquake and tsunami that caused widespread devastation in north-east Japan meant the race was postponed.

Following the tragic events back in March, Crutchlow, Edwards and the rest of Monster Yamaha Tech 3 Team are looking forward to showing their support to management, staff and fans of Yamaha at this weekend's race, which is the 15th of 18 in this year's MotoGP World Championship.

This weekend's Twin Ring Motegi race sees the beginning of a hectic conclusion to the season, with visits to Australia and Malaysia following quickly before the campaign ends in Valencia.

Colin Edwards
“The last couple of races haven't gone according to plan, so there's no better place to try and put things right than in Yamaha's home Grand Prix. I had my best result of the season at the Twin Ring Mot egi last year, so I go there with a lot of confidence that I can fight for another top six. It is not going to be an easy task when you look at the level of competition, but we know the Monster Yamaha Tech 3 Team package is better than last year, so hopefully we'll be in the mix for a good result. Seventh in the Championship is not out of reach and there are four races to go, so we still have a lot to fight for. The Japanese Grand Prix is always a massive event for Yamaha and this year is no exception. It has been a difficult time for the Japanese people, so to go there and demonstrate our support for them is really important. Hopefully we can bring some joy to them by putting on a good show, particularly for Yamaha and all its fans.”

Cal Crutchlow
“I am really looking forward to going to Japan this weekend and I feel full of confidence after the good result at the Motorland Aragon. Fighting for almost the whole race with a rider of the calibre of Valentino Rossi was really good for my experience, and I learnt a lot that will help me for the future. Obviously the Twin Ring Motegi is another new track for me, but I have found my way round other new tracks pretty quickly to be competitive, so hopefully it will be the same in Japan. The good thing is that after this weekend I know Phillip Island, Sepang and Valencia, so hopefully I can end the season with some strong races inside the top 10. It is an honour for me to represent Yamaha in the Japanese Grand Prix, and after a difficult period following the earthquake, I am looking forward to being able to show my support to the Japanese people and everyone connected to Yamaha this weekend.”