Fantastic fourth clinches Rookie of the Year title for Crutchlow 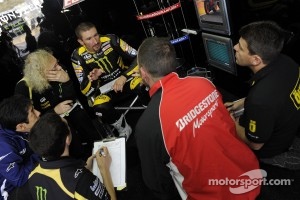 Cal Crutchlow and the Monster Yamaha Tech 3 Team ended the 2011 MotoGP World Championship in fantastic fashion this afternoon, the British rider claiming a career best fourth position to win the coveted Rookie of the Year title in a dramatic race in Valencia.

The 30-lap encounter started with light rain falling on the Ricardo Tormo Circuit, the unpredictable conditions posing a major challenge for Crutchlow and stand-in team-mate Josh Hayes as both quickly tried to assess grip levels on the slippery surface.

Starting from 11th on the grid, Crutchlow immediately found himself elevated into the top five when he avoided a four-rider collision at the first corner.

The British rider then found himself locked in an exciting and tense battle with Rookie of the Year rival Karel Abraham, who was riding an inspired race to try and deny Crutchlow from claiming the title for the second year running for the Monster Yamaha Tech 3 Team.

Just one-point split the pair going into the race and they were barely a second apart for the whole race. They exchanged fifth place several times but the battle became even more nail-biting when rain started to fall heavily five laps from the end.

Crutchlow brilliantly judged where he could push his YZR-M1 machine close to the limit and he took fourth place from Spaniard Dani Pedrosa with a clinical overtake on the final lap. Abraham though was refusing to lie down but as their fight intensified, he made a mistake in the braking zone at Turn 11 and crashed out.

Crutchlow ended fourth to clai m his best ever result and by claiming the highest finish by a British rider in the 800cc era, his result moved him into 12th place in the final rankings as he jumped ahead of Alvaro Bautista.

Hayes was another star performer in today's race, the American showing outstanding skill to finish in a stunning seventh place in demanding conditions.

The conditions couldn't have made his MotoGP debut any tougher, but he brilliantly adapted to riding Bridgestone's slick tyres on a greasy surface to finish in front of the some of the most experienced rider competing in the World Championship.

He had already left Loris Capirossi, Hector Barbera and Hiroshi Aoyama trailing behind him when he passed Toni Elias five laps from the end to deliver a hard earned but richly deserved double top 10 for the Monster Yamaha Tech 3 Team.

Cal Crutchlow
Position 4th - Time +8.718
That was a pretty dramatic way to finish the season and I am obviously thrilled to win the Rookie of the Year title. But I'm equally happy to have finished in fourth place because that was an incredibly difficult race. I'm not sure what happened at the first corner but I came out of it in sixth place and just pushed as hard as I could. It was a really intense battle with Karel right to the end and both of us were giving it everything we had. The track was so greasy it felt like you could crash so easily and when the rain started getting heavier I just got my head down again and kept pushing. I started to catch Dani really fast and I wasn't sure if he had a problem or whether I was pushing too hard. I slowed down because of that and Karel caught me back up, so it came down to the last lap and he obviously made a small mistake. He hit me from behind but I managed to stay on and to finish t he season with my best ever result is a great way to start planning for 2012. This year has been an incredible learning experience and we have a lot to work on for next season, but I feel confident I can make the step to the next level. I can hold my held up high and now I am looking forward to getting my first experience of the Yamaha 1000cc bike on Tuesday.

Josh Hayes
Position 7th - Time +33.118
"It was a very exciting and difficult race but certainly an experience I will never forget. I had a joke with my crew that I should have packed up at lunch after I was fastest in the warm-up! The conditions were really difficult with the rain but riding the Yamaha YZR-M1 with the carbon brakes and Bridgestone tyres was a lot of fun and I enjoyed it. The bike felt perfect each time I went out of the pits and it is a real bonus to finish inside the top 10. It i s not exactly how I wanted to do it with so many guys going down at the first corner but I am happy with my race and how I rode. It was a successful race for me and I managed to beat a lot of experienced riders, which is something to be proud of. Riding a MotoGP is definitely something I would like to do again in my career. I want to send a big thank you to everybody who helped me be here. Yamaha US, GYTR, YES and of course Hervé Poncharal gave me a great opportunity and everybody has been so nice to me. Hopefully people enjoyed seeing me out on track, because I definitely enjoyed being out there."

Hervé Poncharal - Monster Yamaha Tech3 Team Manager Today's race was incredibly difficult because the conditions were very tough and it was hard to understand how much grip there was. But I have to say that Cal did an amazing job and I'm really happy he ended his f irst season in MotoGP with such a positive result. It is never easy to finish so high in MotoGP in such demanding conditions, so he deserves a lot of credit. He was very fast all through the race and it was a fantastic battle with Karel right to the end. For the Monster Yamaha Tech 3 Team to win the Rookie of the Year title again is an achievement to be proud of, and we hope that the experience gained by Cal in 2011 will help him a lot next season. I can't praise Josh enough either. He had a lot to cope with this weekend in learning the track and the bike and the conditions made it even more difficult. He is a fast rider but also a great professional. He didn't make one mistake all weekend and we couldn't have had a better replacement for Colin Edwards.Finally I would like to say goodbye and a million thanks to Colin. I hope he is recovering well at home with his family and we will see him back on track again soon. Colin has been a fantastic ambassador for Tech 3 an d without doubt the most successful rider we've ever had in MotoGP. We will miss him a lot and the memories he has given us will stay with us forever. We wish him all the success in the future with his new adventure.