Riders ready for final round of 2011 at Valencia

Ahead of what will be an emotional weekend at the Ricardo Tormo circuit, where the final round of the 2011 MotoGP World Championship takes place this weekend, the customary pre-event press conference took place on Thursday afternoon.

This weekend will see the MotoGP paddock pay tribute to Marco Simoncelli just two weeks after he passed away in Malaysia, and following the unveiling of his bike in the Gresini Team’s garage for the weekend earlier in the day his fellow riders are determined to put on a show in honour of the Italian.

We’ve had a long time to think over these past two weeks, about what actually happened and what racing means to you.

2011 World Champion Casey Stoner was the first to speak at the press conference and the Repsol Honda rider said: “This race weekend will be something a little different, maybe something a little more special and hopefully everything goes smoothly. We’ve had a long time to think over these past two weeks, about what actually happened and what racing means to you.”

Rain at the track on Thursday gave a hint of what conditions could be expected to be like this weekend, and Stoner commented: “These wet conditions can be a little bit tricky on this track. It can be a little bit patchy with regards to where the grip is and isn’t at times, so we’ll just have to see how the weather plays out this weekend. In general a MotoGP bike is a bit physical to push around here quite fast but the track it is wide and open enough to get the bike flowing.”

Following the weekend the premier class will test the new 2012 machines on Tuesday and Wednesday, and Stoner added: “It’s going to have been a while since we had the last test and hopefully we’ve been able to change and improve a few things since then. We’ll have to understand what we have and what we need to improve for next year. Now we have the race this weekend and after that we can think about what we need to test.”

Ben Spies looks all set to seal fifth position in the standings and the Yamaha Factory Racing rider echoed his fellow riders’ sentiments by stating that a good final race would be a fitting tribute to Simoncelli.

“When we think about what’s happened over the past couple of weeks it’s hard to come to the last race with the emotions we feel, but everybody knows Marco would want us to race,” said the American. “We have to pull together, do the best we can and put on the best race we can for him and everybody else.” 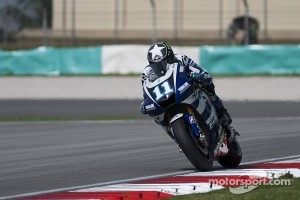 After missing the race in Australia and sitting out the start of the Malaysian GP due to injury, Spies added: “I feel a lot better, I needed a rest. The crash in Australia was pretty big, but now my condition is the least of my worries. I want to get through this race, do the best I can for Yamaha and then move on to the test.”

Valentino Rossi is also prepared to make this weekend an appropriate tribute to his friend.

“It’s been difficult, I’ve tried to stay as much as possible with Paolo (Simoncelli) and the family of Marco who are my friends,” said Rossi. “The feeling in Italy was unbelievable and great for Marco because a lot of people remembered him from all over Italy and demonstrated they liked him a lot on and off the track. In a bad moment like this the atmosphere was great with a lot of people who wanted to say ciao to Marco. It’s good to be here in Valencia. It’s a strange feeling for everybody but I think it’s the best way to remember Marco.”

Once the final race is completed on Sunday the Ducati Team’s attentions will also turn to the test, about which Rossi commented: “On Tuesday we’ll have an important moment for next year because it’s the first time all the 1000cc bikes are on track together. We’ll work and we expect we’ll have to fix some problems but it will be interesting to try the new bike together with the Honda and the Yamaha. But first we have the race, we have to concentrate on that and make a good result, especially to remember Marco.”

Álvaro Bautista was also keen to honour Simoncelli’s memory, following up Rossi’s words with similar sentiments. The Rizla Suzuki rider also said he will make a decision on his future on Sunday evening following the race. 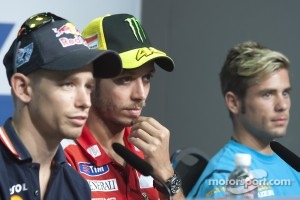 “I have news about next year, but I prefer to concentrate on the weekend,” said Bautista, who gave little away. “I’m talking with the team I have the offer from, for sure I would like to have a decision now but I still cannot decide. I hope to make it after Sunday’s race. I want to concentrate and finish the year with a good race.”

This weekend will also see the conclusion of one of the most lengthy and distinguished careers in the history of the World Championship. Loris Capirossi is set to start his 328th and final Grand Prix, bringing down the curtain on a career which has spanned 22 seasons, three World Championship titles and 99 podiums.

Capirossi’s first words were about his friend Simoncelli, and he said: “The situation is strange for everyone. We are all here and we try never to forget Marco – this is really important because he is part of our life and always tried to do his best. For this I want to keep his honour and I want to use his number 58 on my bike for this race. I really hope he is happy about that and that I can achieve the same result as he could. I will do my best for him and after this race I will of course retire as planned. I am happy because after 22 seasons it’s a good time to stop. There are a lot of strong riders and it’s good to do something else.”

Capirossi concluded: “Like all stories start, they all finish and mine is finished. After this race I have my family and something good I think I can do with my life.”

2011 finale in Valencia to pay tribute to Simoncelli