Tough Qualifying for Spies in Malaysia 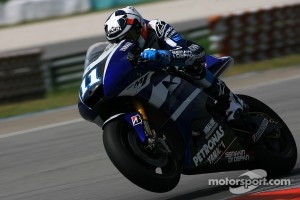 Qualifying for the Grand Prix of Malaysia proved to be a tough challenge for Yamaha Factory Racing rider Ben Spies today at the Sepang International Circuit. The Texan’s injuries sustained in Australia continue to hamper his abilities to ride to the limit. As a result Spies crashed in both the morning practice and afternoon qualifying session, finally taking 16th place on the grid for tomorrow’s race.

Katsuyuki Nakasuga made a step forward today, Jorge’s replacement rider getting more familiar with his bike and team as the weekend progresses. Nakasuga-san wrapped up qualifying 2.6 seconds from pole, over two seconds closer to the fastest rider than yesterday. He will start tomorrow’s race from 17th on the grid, behind his temporary team mate Spies.

“It’s been a pretty eventful weekend. The bike is working really well but I’m just not feeling 100% and ready to get it over and done with. Qualifying was tough, we went out there and experienced a crash, I’m not sure why yet but we’ll check the data later. We don’t have a great position on the grid but we’ll do the best we can for points to try and hold on to fifth place for the Championship.”

“This morning’s session was quite positive for me. I had a good feeling and found a rhythm on the track which was very motivating. Tomorrow I will try my best for a good position. The bike set up is working well so I am feeling confident for my first ever MotoGP race.”

Wilco Zeelenberg - Yamaha Factory Racing Team Manager
“This is a completely different experience to last year where we won the Championship here. Now we are second last and last on the grid. I think Nakasuga-san did a good job today, his lap time was a lot better than yesterday and he didn’t crash so he did well. He has to learn a lot but we are now approaching it the right way. He’s improving so let’s see how he gets on tomorrow. It’s going to be a long hot race, he looks good in a group so hopefully he can stay up there with some of the pack and fight with them until the end.”

Massimo Meregalli - Yamaha Factory Racing Team Director
“It is a very tough and strange weekend for us. Ben is trying very hard; he’s putting in all he can. We have to consider what is best for him tomorrow so we will have a meeting tonight and make a decision for the race. Nakasuga made good improvements today with consistency, he has definitely made a step from yesterday and we know he will do his best during the race tomorrow.”