Lorenzo flies to a front row start for Motegi GP

Reigning World Champion Jorge Lorenzo delivered a stunning performance this afternoon in qualifying to take second on the grid for tomorrow’s Grand Prix of Japan.

After struggling in the previous sessions for braking stability and maximum lean grip, Lorenzo’s crew made key set up changes which transformed the Mallorcan’s YZR-M1 for the final session. The final minutes of qualifying saw him smash the pole record of the Motegi circuit with a 1’45.523, only to have pole snatched back in the last seconds by rival Casey Stoner.

Fellow Yamaha Factory Racing rider Ben Spies experienced another exhausting day of riding as he battles to recover from a serious bout of food poisoning caught before travelling to Japan. Despite his reduced fitness and stamina level the American put in a huge effort in both morning practice and qualifying to take fifth on the grid and a second row start for the race.

Jorge Lorenzo:
“We tried something different this afternoon and our lap times were unbelievable, we almost got pole! The most important thing is the first row because there are riders like Casey who find it easy to escape so I want to be right there. We have improved today but Motegi is still a tough track for Yamaha riders. If the other riders do a perfect race it is almost impossible to win, but anything can happen. Now I can say I am ready for the battle and we will put on a good show for all the Japanese fans who have come to see us race!” 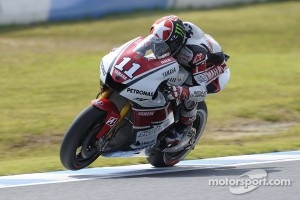 Ben Spies:
“I’ve had a lot of support from the guys at Clinica to get me back towards 100% fitness. I’m just glad now to be on the bike, a couple of days ago I didn’t think I was going to be able to ride. I’m really happy to have got into the middle of the second row today and I hope things get even better for tomorrow, we’ll see how it goes. Yesterday I was pretty weak on the bike, this morning I felt a bit stronger and this afternoon I felt ok with energy levels, I was just fighting a lot of stomach cramps. I’m doing the best I can for my crew and the paddock and all the fans who are here to watch us.”