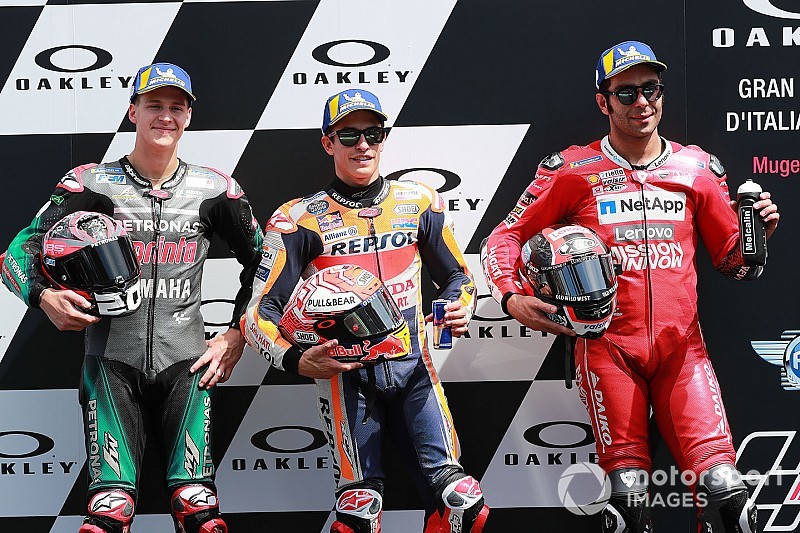 Marc Marquez secured his fourth pole position of the 2019 MotoGP season after edging out Fabio Quartararo by 0.214 seconds at the end of a frenetic qualifying session for the Italian Grand Prix.

Reigning champion Marquez established a new lap record at Mugello with his best time of 1m45.519s on his Honda, eclipsing the 1m45.733s set by Quartararo on the Petronas SRT Yamaha.

Danilo Petrucci, who earlier in the day beat the existing record at the Tuscan circuit, was third-fastest, as the top five riders all bested the Ducati rider's previous benchmark.

It was Quartararo - who took his first MotoGP pole two races ago - that led after the opening runs in Q2 as he knocked Marquez off the top spot with a 1m45.992s, before improving to a 1m45.845s.

The latter time was enough for provisional pole right until the chequered flag, when Marquez improved with the help of a tow from title rival Andrea Dovizioso.

Maverick Vinales, second after the first runs, couldn't improve in the closing stages and will start seventh on the best of the works Yamahas, followed by Francesco Bagnaia (Pramac) and Dovizioso, who had earlier set the pace in Q1.

The top two spots in Q1 were occupied by Ducati riders, as Dovizioso and Pirro set times just 0.005s apart to book their places in the second segment of qualifying.

Ducati elected to keep Pirro in the garage for the second runs, and the wildcard was duly demoted to second when Dovizioso posted a 1m46.278s to grab the top spot.

Rins couldn't improve, however, and will therefore start Sunday's race from 13th on the grid ahead of Tito Rabat's Avintia Ducati and Aleix Espargaro's Aprilia.

Valentino Rossi faces the prospect of starting his home grand prix in 18th, a year on from taking pole at Mugello, behind Karel Abraham (Avintia) and Jorge Lorenzo (Honda).

Rossi was only seventh on the opening runs, and didn't get a proper flying lap on the board after changing tyres, which left him 0.906s shy of Dovizioso's time and with his worst qualifying result since last year's Aragon race.

Johann Zarco suffered a high-speed crash at Correntaio on his final lap and will start 19th, one place ahead of Joan Mir's Suzuki, while Andrea Iannone (Aprilia) rounds out the 23-strong field.

Mugello MotoGP qualifying as it happened