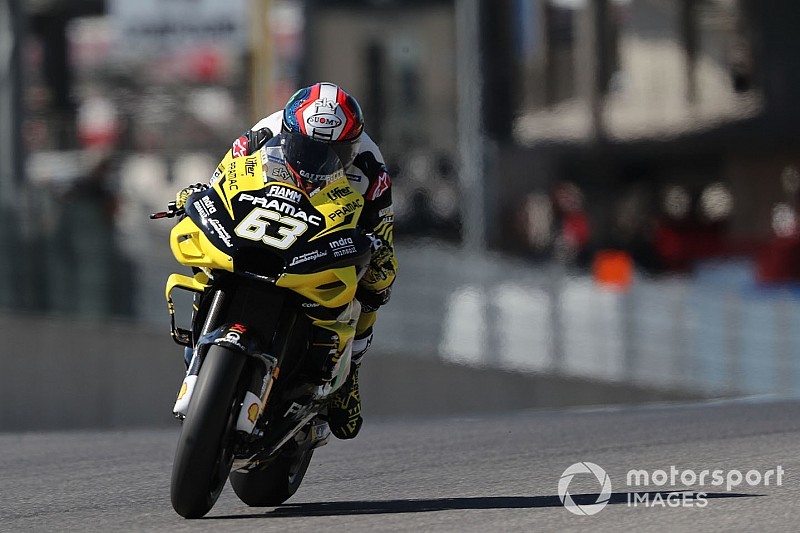 Pramac Ducati rookie Francesco Bagnaia moved to the head of the timesheets in second practice for this weekend's Italian Grand Prix, ahead of fellow MotoGP newcomer Fabio Quartararo.

Bagnaia's best time of 1m46.732s came in the dying seconds of the Friday afternoon session as most riders opted to close out the day with a fresh soft rear tyre.

Among those not to do so was Marc Marquez, who surpassed his own FP1 benchmark on only his second flying lap - setting a 1m47.062s that went unchallenged until the closing stages.

With six minutes left on the clock, Danilo Petrucci deposed the Honda rider by setting a 1m47.012s, before Pol Espargaro went fastest aboard the KTM, becoming the first to break into the 1m46s.

Factory Ducati man responded with a 1m46.863s moments later, but that was then beaten by Quartararo's 1m46.778s on the Petronas Yamaha and then Bagnaia's last-ditch session-topping effort.

Petrucci ended up third ahead of Espargaro, while Maverick Vinales was the fifth and final rider to crack the 1m47s barrier on the best of the works Yamahas.

Franco Morbidelli completed the top 10 - and thus the provisional Q2 positions - on the second Petronas SRT bike, fractionally ahead of Andrea Dovizioso's Ducati in 11th.

Johann Zarco was 12th on his KTM despite becoming the first crasher of the weekend with a late fall at the sweeping Palagio left-hander.

That was soon followed by Miller running into the gravel and crashing at the following bend, Correntaio.

Aleix Espargaro once again led Aprilia's efforts, albeit down in 16th after ending up fifth in FP1, while Valentino Rossi was nearly a full second off the pace in 18th place.

Jorge Lorenzo was a lowly 20th on the second works Honda, 1.382s slower than Bagnaia.

Petrucci could quit MotoGP if not retained by Ducati