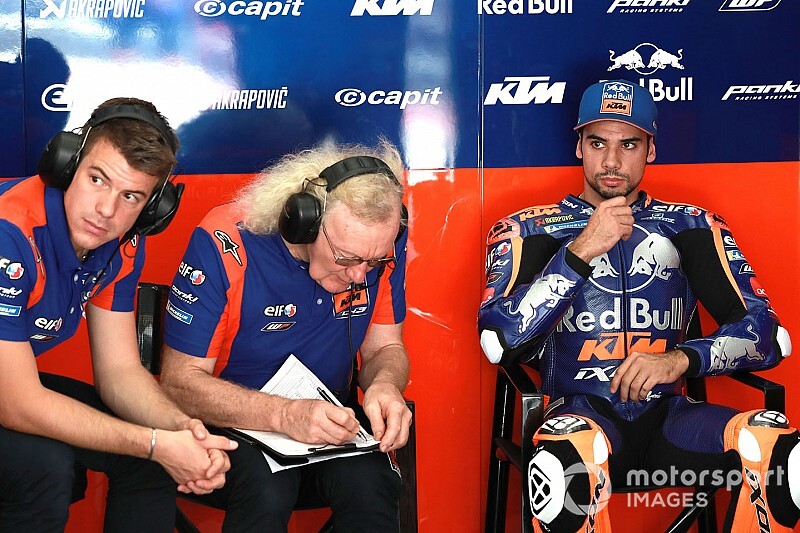 After KTM announced that it picked Moto2 rider Binder as Johann Zarco's full-time replacement in its works outfit for 2020, Oliveira - who impressed in his rookie MotoGP campaign in 2019 - said at Phillip Island that the decision made him feel "not worthy" and made sense "only" to KTM.

KTM swiftly moved to clarify that Oliveira had been offered the works seat in a meeting back during the Misano race weekend and passed it up.

And Beirer - who wasn't in attendance in Australia - has now admitted that the Portuguese rider's comments had caught him by surprise.

"It was one of the most surprising things for me when Miguel suddenly told the microphones far away from me in Australia that he was so disappointed and that it was a clear signal from KTM that we were ignoring him and not counting on him," Beirer told Motorsport.com. "I was shocked!

"He had the offer [to join the factory team] and in my opinion he made a good decision [to stay at Tech 3], because he won't have any disadvantages at Tech 3.

"But this public chat was a bit unfair at that moment. We have since talked it out, and he can remember the Misano conversation really well.

"It was a really unpleasant moment for me to sit at home and hear those words because the one reason behind the meeting in Misano was to prevent us from experiencing this exact situation.

"Now the matter is settled, we've put a line under it."

Oliveira had indicated he expected somebody like test rider Mika Kallio to get the ride rather than his fellow young upstart Binder, but Beirer insisted neither rider's name had come up at Misano.

"He [Oliveira] was happy, we were happy. He went to Herve [Poncharal, Tech 3 team boss] afterwards and confirmed to him that he would stay," Beirer recalled.

"Everything was clear. It was clear to us that we now had to find a second rider for the factory team. But of course we can't go to Miguel's with every name under consideration and ask him [again] if he wants to come or not."

Oliveira had been nursing a shoulder injury in the final stretch of his rookie season, pulling out of the latest races at Phillip Island and Sepang.

Having undergone surgery last Monday, he will be substituted by his 2020 teammate Iker Lecuona in the Valencia season finale.

Beirer said the emphasis was on Oliveira being fit in time for the start of 2020 pre-season testing at Sepang in February.

He added: "For us it was a hard decision. At the moment we are under pressure anyway and things are not going so well.