Tech 3 KTM rookie Miguel Oliveira revealed that he was caught out by a change in the direction of heavy wind gusts, which caused his huge crash in MotoGP's FP4 session. 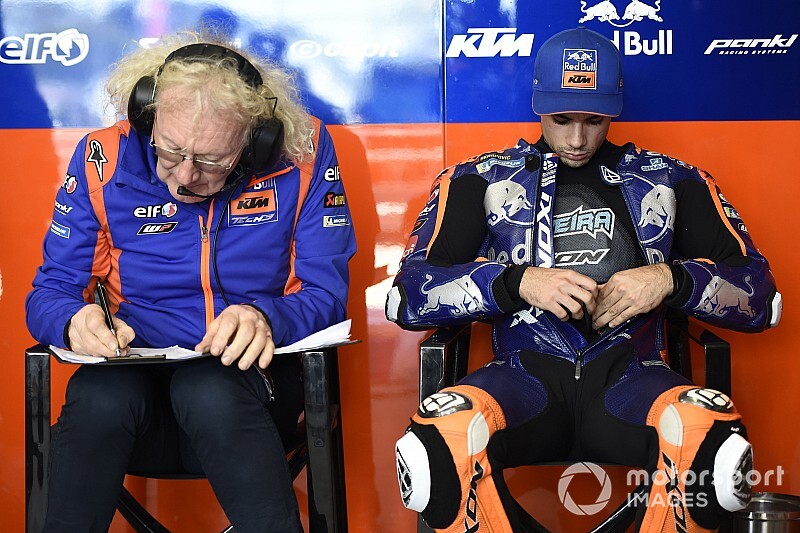 There was heavy wind at the Phillip Island circuit throughout all of Saturday, which limited running to a bare minimum in FP3.

Conditions were also difficult in FP4 and Oliveira suffered a heavy crash at Turn 1 when he was pushed out of the track to the grass by a wind gust.

The Portuguese rookie was taken away on a stretcher to the medical centre but checks revealed he escaped the high-speed crash without any broken bones.

Oliveira revealed that he crashed not only because of the wind, but because its direction "completely changed" from FP3.

"I was slipstreaming Zarco and at that point I was a little bit more close to the left side of the track," he said.

"From the morning to the afternoon the wind just completely changed the way and it was really sideway going onto the straight.

"I roll off to let Johann pass and when I brake, I brake completely sideways and the wind just push me out of track. After that, nothing else to add."

Although he escaped the crash without any serious injuries, Oliveira hasn't been declared fit to race yet, and he will need to pass a medical test on Sunday morning.

"In the medical centre, at first they check me and they see nothing was broken in my hands, but they did not declare me fit.

"I need to pass tomorrow to see if I can close my hands to ride. The rest is fine, the shoulder seems a little bit painful also.

"I just need to wake up tomorrow and hope for the best."

Rossi added that the wind was "very aggressive" and "difficult to predict" and that Turn 1, where Oliveira crashed, was just one of the numerous places on track which were dangerous.

"Especially in the tunnel to the ocean, last corner, and all the front straight where Oliveira crashed, crosswind, [but] not always. Gusts.

"You arrive very high speed and you don't know what happens. Also Turn 3 was dangerous.

"The problem is that the wind is too strong and also is difficult to predict because [it] is not constant. It is very aggressive."

Rossi, who first raced at Phillip Island in 1996 said that such conditions are very rare but recalled a 250cc test when he had to stop.

"Is a long time since you have bad condition. Like today, here in Phillip Island was a long time.

"Last time I remember was one test with 250cc that had very strong wind, and at the end, we stop."

Crutchlow: Qualifying would have been "unrideable"