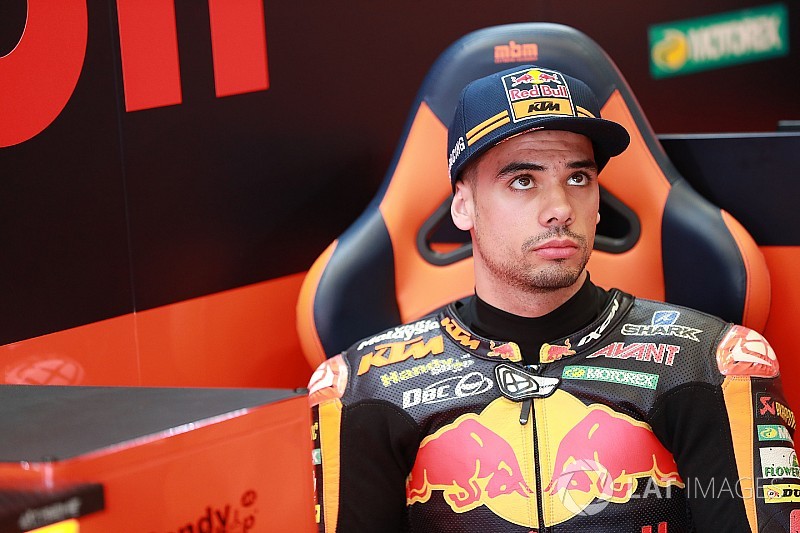 Moto2 frontrunner Miguel Oliveira will step up to MotoGP with the Tech 3 team in 2019, which will be the French outfit's first season running KTM bikes.

Tech 3 will end its long-standing relationship with Yamaha at the end of the year, joining forces with KTM as a satellite team running factory-specification bikes.

And the Austrian manufacturer has now announced it will place Portuguese rider Oliveira, who has raced in the KTM-supported Red Bull Rookies Cup and represented the marque's factory outfit in Moto3 and Moto2, on one of those bikes in 2019.

"This is an emotional step for us because it proves all what we have said about building a structure in this paddock and being able to come from the Red Bull Rookies Cup, go through the classes with us and end up in a MotoGP team," KTM motorsport boss Pit Beirer said.

"Miguel has his goals for race wins, podiums and the title in Moto2 this year, and he has our full support for that, and then his MotoGP career will start in Valencia [post-season testing]."

Oliveira, 23, is in his third season of Moto2, having joined the intermediate class after taking six wins en route to the overall runner-up spot in the 2015 Moto3 season.

He finished third in the Moto2 standings last year, winning the three final races of the season, and sits fourth in the current season's points classification.

"It is very early in the season but I am really happy that KTM have seen enough from this year and the last to trust me and believe I deserve this opportunity in MotoGP," Oliveira said.

"I’m really thankful for that. I’ve always dreamed of MotoGP. I had it as a goal and to be able to achieve that is something so positive.

"We still have a long Moto2 season ahead and the fact that this is already done allows me to relax and really focus on my riding.

"I have been through all the steps that Red Bull and KTM have together since the Rookies Cup; I believe I’m the first. I think that shows other riders can trust in KTM and their project.

"I think I have the skills and the will to be able to perform well on a MotoGP bike.”

Oliveira's signing, coupled with the recent confirmations of factory seats for Johann Zarco and Pol Espargaro, mean the other Tech 3 seat is the only KTM ride that remains up for grabs on the 2019 grid.