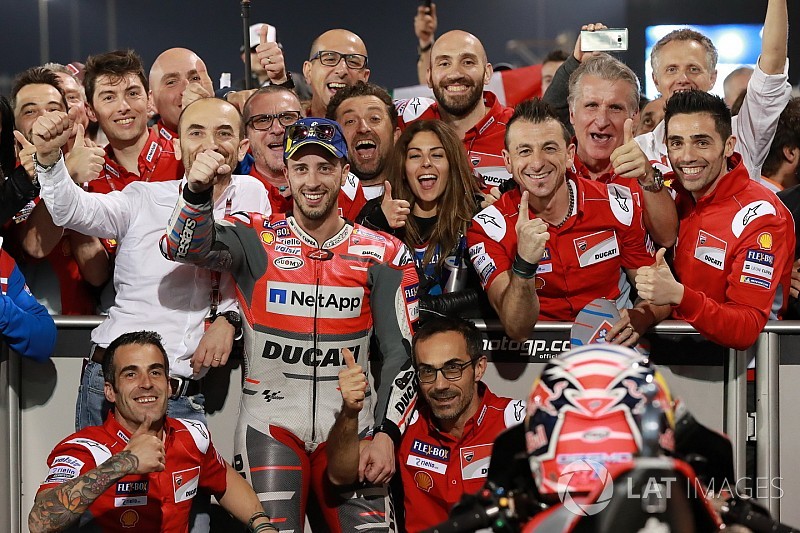 Amid renewed interest from rival factories in Andrea Dovizioso, Oriol Puigdemont argues that Ducati can ill-afford to allow the Italian rider to be tempted to jump ship - and therefore needs to pay up.

It should come as little surprise that the likes of Honda and Suzuki are interested in signing Dovizioso, who once again is looking like being Ducati's sole hope of a championship title this year.

His victory in Qatar served to confirm what pre-season testing indicated, which is that Dovizioso is the man with the best chance of dethroning MotoGP's dominant force, Marc Marquez.

When Ducati bet on Jorge Lorenzo to help it win its first premier class crown in a decade, it probably didn't realise just what effect the unique characteristics of the Desmosedici would have on his chances.

One year on, while the Spaniard is clearly much more at home now on the Ducati than he was at the start of his tenure, he still needs to prove he can win races, let alone the championship.

While Lorenzo could well get his first victory on a Ducati this year, Dovizioso is by far the surer bet in terms of launching a championship challenge - and not only because of his Marquez-equalling tally of six victories last year.

You also have to consider the sensational level he's reached at such a late stage in his career (he turned 32 last week), his maturity and his excellent relationship with his team.

Ducati has no choice but to renew his contract if it wants to continue its resurgence, and that inevitably means upping Dovizioso's salary. And you can't question such a pay increase has been earned.

The Borgo Panigale marque simply can't afford to risk losing the only rider that has come anywhere near winning the title since Casey Stoner's triumph more than 10 years ago.

Dovizioso and his management are keeping their cards close to their chest for now, and are clearly using the interest they have from rival manufacturers to their advantage.

Were he to join Honda or Suzuki, there would be the added bonus of five years' worth of intimate knowledge of the Ducati, in addition to his speed and his experience of developing a race-winning bike.

At the moment, Dovizioso is on a basic salary of less than two million euros, a sum that was negotiated when he was vying with then-teammate Andrea Iannone to keep his place in the squad alongside Lorenzo.

Since then, he's won eight races with the Desmosedici, while three-time champion Lorenzo has just three podiums to show for his 2017 campaign despite his annual salary of 12 million euros.

Lorenzo has admitted his market value has dipped since that two-year deal was signed, and Ducati itself has also ruled out spending so much on one rider's salary again. The question is now how it will balance the need to pay Dovizioso more with Lorenzo's reduced earnings.

While this doesn't necessarily mean paying the two riders equally, it does mean making Dovizioso feel valued for his successes while not alienating Lorenzo with an insultingly low offer - all while staying within budget.

Ducati has made it clear it wants to keep both riders into 2019, but it has the luxury of a ready-made replacement in the form of Pramac rider Danilo Petrucci, on whose services it has an option that expires in the summer.

Petrucci has shown himself to be a potential front-runner and possible race winner in the wake of Ducati's increased support for Pramac, and there's little doubt he would make a fine number two rider for the works squad.

But, as for a number one, there's no viable alternative right now to Dovizioso. Ducati can't allow him to go elsewhere.

Marquez and Pedrosa to test at Jerez on Monday

Espargaro “needed to crash” in practice to understand limit