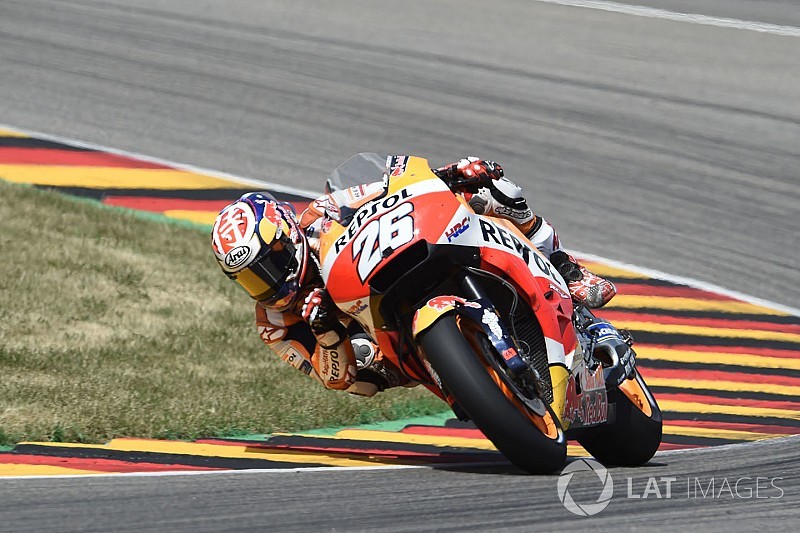 Dani Pedrosa admits that certain characteristics of this year’s Honda MotoGP bike have made his life harder in the wake of his decision to retire from the championship.

The 32-year-old veteran announced his impending exit from grand prix motorcycling in a press conference last weekend at the Sachsenring, where he finished eighth – 12 seconds behind victorious teammate Marc Marquez.

Honda’s decision to drop Pedrosa in favour of Jorge Lorenzo for 2019 comes amid a tough first half of the season for the former, who lies just 12th in the standings with a pair of fifth-place finishes at Le Mans and Barcelona as his best results.

While he describes the 2018 version of the RC213V as a more consistent bike, Pedrosa says he finds it much harder to extract one quick lap from it.

“Maybe the characteristics of the bike this year are a little different in some aspects, and it does not allow me to ride as I would like,” admitted Pedrosa.

“This year’s bike is very constant, but it’s harder to make one fast lap. It does not allow me to take corners as I’d like and it’s more difficult than last year’s also in the races.

“I can’t take all the potential of the bike. From circuit to circuit, my first and last laps are identical, which means I’m not taking the maximum advantage from the tyres.”

Pedrosa said that his strong form in the first two pre-season tests of 2018, topping a day of running at both Sepang and Buriram, meant he didn’t push hard for changes to the RC213V in that phase of the season.

He feels the only track since then where he has been able to reach the bike’s potential is Jerez, where he qualified second only to then get involved in a collision with both factory Ducati riders and retire.

“I had some complaints [about the 2018 bike during testing], but maybe they were masked by the quick times,” recalled Pedrosa.

“The first two tests were good, but I could only go fast on new tyres in three places: Sepang, Thailand and Jerez.

“The rest of the year I could not adapt to the bike and find the setting that gives me speed and the way of riding I know.”

Pedrosa also denied that the fanfare surrounding his retirement announcement had distracted him at the Sachsenring, a track where he has enjoyed success in previous years.

“Obviously I have many messages and people talking to me, but the thing I like the most is riding fast,” he said.

“I try to stay all the time with the mechanics and watching data, numbers, and thinking then what to change with the bike, what steps to do.

“This is what I want to do, to be fast until the end [of the year]. This year has been kind of a struggle, but I was always thinking on how to be fast.”