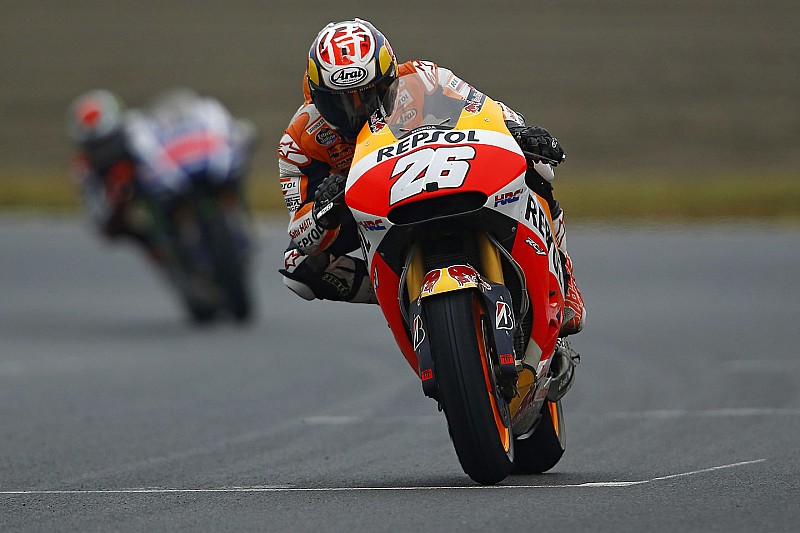 After taking a surprise triumph in last weekend’s Japanese Grand Prix at Motegi, Dani Pedrosa says he is currently on his best form in two years.

The Honda rider broke a winless streak dating back to last year’s Brno race with the Motegi win, which came as Pedrosa took advantage of a drying track to overhaul both Valentino Rossi and Jorge Lorenzo.

It was his first victory since missing three races earlier in the season after forearm surgery, and his second straight podium finish after coming out on top in a fierce duel for second with Rossi in the previous race at Aragon.

Asked after the race when the last time felt he was riding as strongly, Pedrosa said that it was in 2013, before the arm pump troubles began and resulted in needing an operation.

“Probably back to 2013, because last year I won one race [at Brno] but I was also suffering physically,” he explained.

“The Brno race I didn’t enjoy because I was suffering on the bike. In the wet you don’t have so much stress compared to the dry, so you can focus more on the riding.

“But more than the victory, the thing is I enjoyed the race a lot today, like in the last race with Valentino.

“We know in the dry it could have been a different story because Yamaha had very strong pace compared to us, but we had a chance [with the rain] and we took it.”

Pedrosa also explained that a set-up breakthrough made in the wet during August’s Silverstone round was a factor in his victory.

“Technically we have to work a lot next year, because in the dry we are clearly behind [Yamaha], but we learned a lot from Silverstone how to set-up the bike for the wet,” he said.

“The race in Aragon gave me some confidence, and this morning we had a good pace in warm-up, which gave me extra confidence.

F1 vote to include aero handicap and open source ideas