Petrucci was promoted from the satellite Pramac team to replace Honda-bound Lorenzo inside the Ducati works operation for 2019, and made his debut outing in factory colours last month in the first post-season test at Valencia.

He also topped the first day of running at the final test of 2018 at Jerez ahead of Dovizioso.

The second year of the Dovizioso-Lorenzo partnership was characterised by a simmering feud that boiled over at several stages in the year, most notably at Sepang – where Lorenzo lashed out at the Italian on social media for comments regarding his injury-enforced absence.

But Petrucci says he is determined to avoid a repeat as he replaces Lorenzo and that Dovizioso has also been congenial in their dealings as teammates so far.

“Dovi and I are very good friends and I respect him a lot on a personal level,” said Petrucci. “As a rider I respect him even more because seeing his data [I know] he does things that I would like to emulate.

“This winter we train together, we speak clearly and we want to avoid being enemies. We want to try and work together in the box and there is an atmosphere of great serenity: often he comes to my side of the box and I go to his.

“I’m proud to be able to give him a hand and he needs a strong rider alongside him to be able to compete. Therefore I’m happy he wanted me by his side for next year.”

Dovizioso said it was “difficult to evaluate” his new teammate’s contribution to Ducati at this early stage, but his comments about their personal relationship echoed those of Petrucci.

“When there is a change there are always pros and cons,” said Dovizioso.

“When you have a champion like Lorenzo in the team it’s always something special, but at times it can create situations in which fewer points are won than would have been otherwise the case.

“With Danilo we will work more starting from Malaysia, but there is already a good relationship between us and we are happy to discuss various details.

“And it’s good when there is this kind of relationship, because it’s possible to improve the details. If we work well together like this, it’s just beneficial for both of us.” 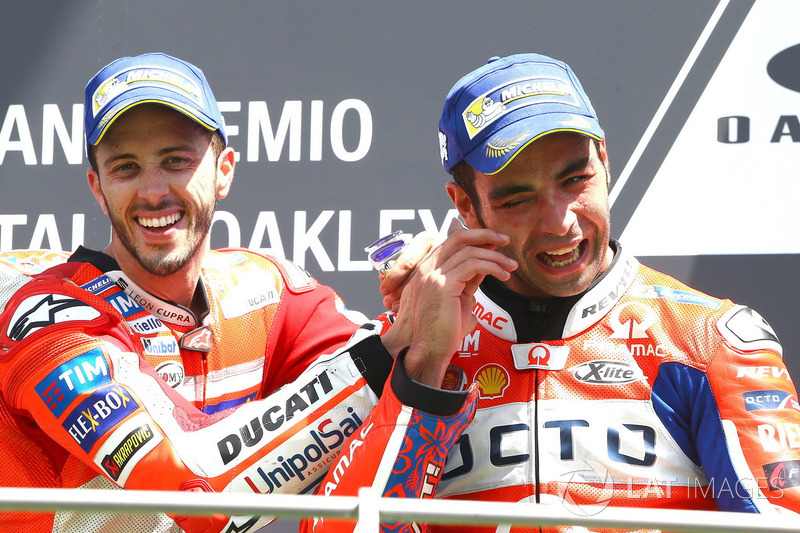