Ducati MotoGP rider Danilo Petrucci says the new parts brought for the post-Catalan Grand Prix test have improved the turning of the GP19, while also keeping the bike strong in braking. 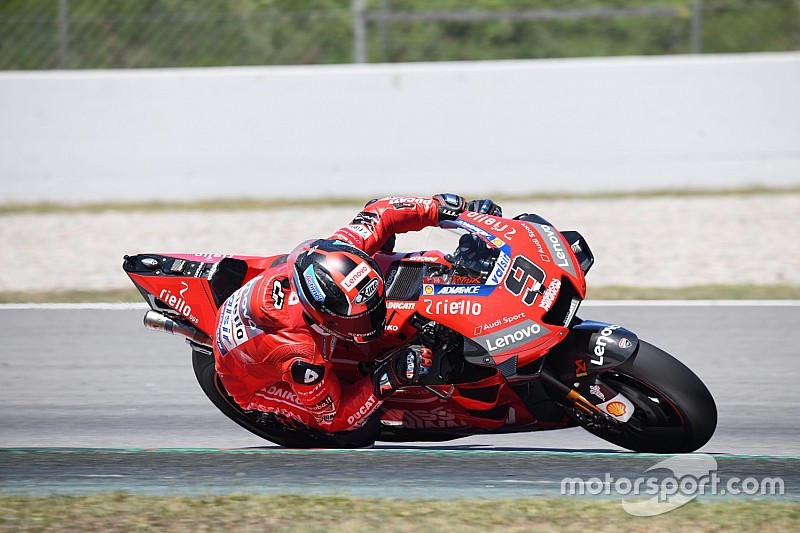 Corner speed has long been regarded as Ducati's Achilles' heel in MotoGP, as it relies on strong top speed, acceleration and also late braking.

Petrucci confirmed that it was indeed his weak point during the Sunday race as he was overtaken by Alex Rins and Fabio Quartararo in fast corners.

But in the Monday test, Petrucci tested new parts on the chassis of his GP19 and he reported improvements in long corner speed without compromising the bike's strong braking which, allowed him to keep Rins at bay for several laps.

"I did all the race with the Yamaha and Suzuki and we are very strong in acceleration and braking but I suffer in the long corner," explained Petrucci, who salvaged third in the race.

"Alex passed me on Turn 4, Fabio Turn 3, because we can't carry the speed because the bike is stable but there is always the problem of understeering.

"Then in that part for sure we keep the bike good on braking and we improve this part of turning. So it is good."

Petrucci, who ended the test 11th, said that he will start with the new parts in the new race at Assen, where cornering speed is crucial.

"For sure is a small thing but I think is very good for Assen," he added. "We think is good for Assen so we start with this. We found many many other things, for the aerodynamics and electronics that work."

Andrea Dovizioso ended the test 0.008s slower than his teammate, having tested a brand new chassis. He was also pleased with the new parts, which allowed him to be stronger on corner entry, and will also consider using it at Assen.

"I try one different chassis. It wasn't easy to feel the difference because every time you change something on the chassis, very difficult.

"I am happy because I feel the difference, looks like the entry is a bit better, this is positive but is difficult to say how much is the improvement.

"I am happy, we are working on that, normally in the race weekend, you understand something more about that when you are with the other riders.

"When you change something like that, you need the experience to understand exactly the characteristic.

"Maybe [we will use it in Assen], still, when you have one piece and one week, is not easy. Still we have to make the plan but I think so."

Dovizioso was an innocent victim of a four-rider crash in Sunday's Catalan GP and suffered his first retirement of the season, his deficit to Marquez growing to 37 points.