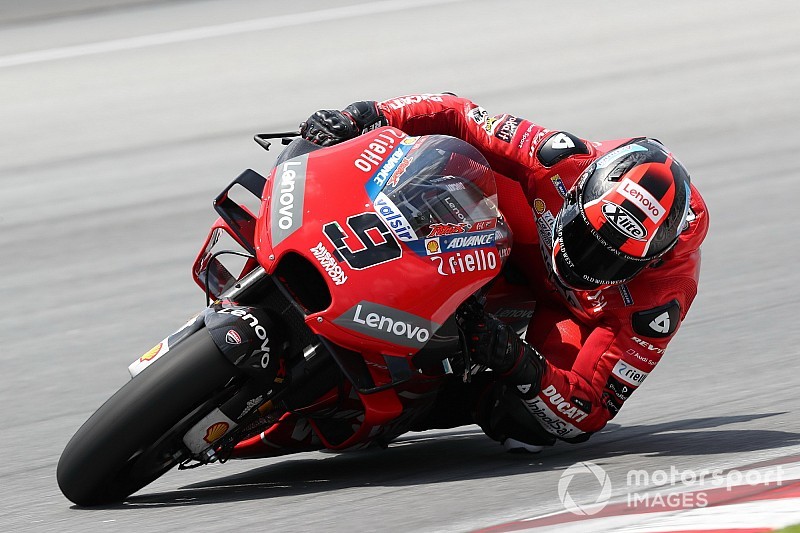 Danilo Petrucci smashed the unofficial MotoGP Sepang lap record on the final day of the pre-season test at the Malaysian venue, as he led an all-Ducati top four.

The Italian's 1m58.239s lap was almost six tenths better than the previous record that was held by his Ducati predecessor Jorge Lorenzo since last year's winter testing.

Petrucci logged the new benchmark towards the end of the session's opening hour.

He subsequently had a crash at Turn 5, destroying the new aero fairing Ducati had debuted on the day.

His Pramac squadmate Jack Miller was another six hundredths slower and crashed his GP19 bike late on, while Andrea Dovizioso made up an all-Ducati top four, three tenths off Petrucci.

Like Ducati, Yamaha also debuted a new fairing on Friday as its ranks were once again headed by Maverick Vinales.

The Thursday pacesetter was first to surpass Lorenzo's previous track record on the final day, but ultimately wound up best of the rest behind the Italian bikes in fifth.

LCR rider Cal Crutchlow led Honda's efforts in sixth and was the last rider to dip below Lorenzo's previous benchmark.

Aleix Espargaro was seventh for Aprilia, while Andrea Iannone continued to struggle with an infection and skipped the day entirely, replaced by tester Bradley Smith.

After finishing behind rookie squadmate Fabio Quartararo on Thursday, Petronas SRT Yamaha rider Franco Morbidelli was back ahead on the final day, taking eighth place to Quartararo's 16th.

Suzuki's Alex Rins was only 12th after claiming the runner-up spot on the first two days, while his rookie teammate Joan Mir took 15th, 0.001s behind the Avintia Ducati of Tito Rabat.

The MotoGP field will reconvene in Qatar for the final pre-season test later this month, before the 2019 season kicks off at that same venue on March 10.