Ducati's new factory rider Danilo Petrucci said his first day testing with the team in Valencia was "very emotional" and felt like "the first day at school".

Petrucci, who spent four years at Ducati's satellite team Pramac, is replacing Jorge Lorenzo at the works outfit in 2019.

The Italian made his first appearance with the factory squad on Tuesday on the opening day of the post-season test in Valencia, and finished eighth, 0.684s off the pace.

“It was a very, very emotional day. The feeling was like the first day at school,” Petrucci said.

“[It] was a long time that I haven't done a thing for the first time. It's a dream that comes true, to wear these colours.”

Petrucci admitted he was “a little bit not focused” at the start of the day because of the emotion of the occasion, but was ultimately happy with how it panned out, despite rain bringing an early end to the proceedings.

The Italian, who ran a 2018-spec Ducati at Pramac this year, started Tuesday with the same specification but soon switched to a 2019 Desmosedici prototype.

“It was a very good day. We try the new [2019] bike, the new bike has got no negative things and this is very, very good.

“In the pit, there's a very calm and relaxed environment, I liked this.

“Unfortunately the rain comes in the moment when I was quite fast, with used tyres. Was a shame but it's only the first day.”

Valencia GP winner Andrea Dovizioso was a quarter of a second ahead of new teammate Petrucci in fourth, but admitted the day was largely a write-off.

“Unfortunately we couldn't start with a real comparison of the new bike,” Dovizioso said.

“We did some exit with the bike from this year because we wanted to create a base, because we couldn't ride the bike, on the weekend, on the dry and with a good speed.

“We prepare everything, to make a right comparison, but it start to rain. Not a really important day.”

The Italian suggested he would have to do more running with the 2018 spec on Wednesday before beginning work on next year's version.

“Every time we try something new, it has to be everything perfect,” he said.

“Tomorrow morning, we have to see the condition. Again we have to start with the previous bike because we have to create another base to understand exactly the difference.

“We don't have a completely new bike, we are working in details.” 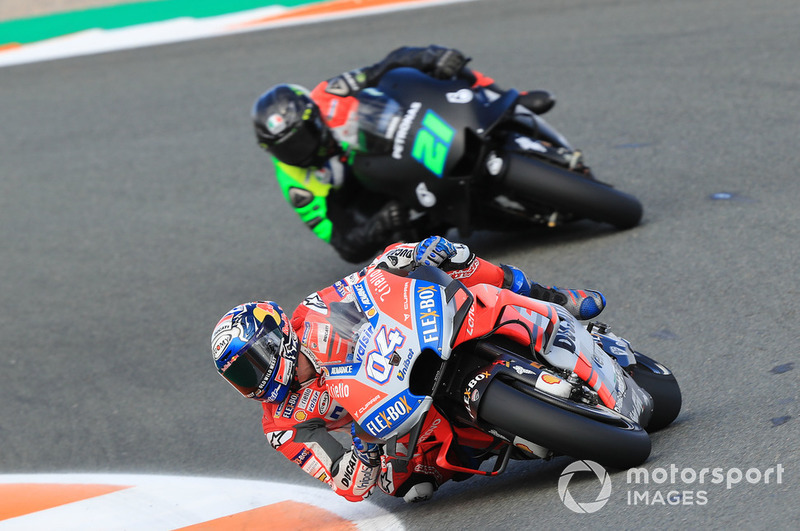