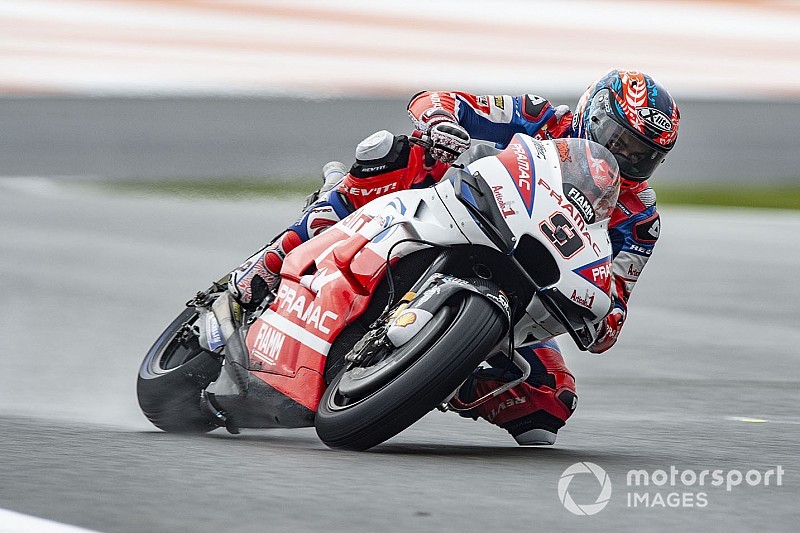 After a fully wet Friday, FP3 also kicked off on a soaked track - but with no rain falling, improving on Friday times seemed possible.

However it started raining almost immediately and the field, with the exception of Marc Marquez, couldn't get close to the Honda rider's Friday benchmark of 1m39.767s for the majority of the session.

Rossi led the way early on while times were in the 1m41s region, but the Yamaha rider's progress was soon halted with a highside crash at Turn 4.

Marquez took over at the top and held a comfortable lead for a big part of the session until Petrucci edged him out by half a tenth.

Although Ducati works rider Andrea Dovizioso then set a 1m39.800s and led into the final 10 minutes, Petrucci was able to improve again in the dying stages and topped the session with a 1m39.712s.

Dovizioso and Marquez were second and third, with Jack Miller taking fourth and then suffering a crash after the chequered flag fell.

Johann Zarco was the top Yamaha in fifth, as both factory riders are outside of the top 10 and will have to take part in Q1.

Maverick Vinales missed out on the top 10 by 0.061s in 11th with Rossi finishing two places further behind.

Alex Rins and Aleix Espargaro led Suzuki's and Aprilia's efforts in eighth and ninth respectively, with Ducati wildcard Michele Pirro holding on to 10th despite a late crash.

Rins fell at the end of the session, with Suzuki teammate Andrea Iannone and Aleix Espargaro also having incidents during the practice.

Iannone ended up only 15th, with the recovering Jorge Lorenzo taking just 17th, 1.3s off the pace.

Valencia MotoGP qualifying as it happened