Danilo Petrucci has hit out at fellow Ducati MotoGP rider Jorge Lorenzo after what he called a "terrifying" near miss during practice for second practice at Silverstone.

The pair nearly came to blows in the closing stages of FP2 at Vale corner, where Pramac rider Petrucci encountered Lorenzo’s works Desmosedici on an out-lap and very nearly collected the three-time premier class champion.

Petrucci said the incident cost him the chance of being in the top 10 in second practice and criticised Lorenzo for not paying closer attention at who was coming up behind him.

"Lorenzo does not care about the other drivers when he's on the track,” said Petrucci, who finished up only 12th fastest.

“He left the pits and did not look if someone came from behind, as I was.

“It was terrifying, he was in the middle of the track and I came with a lot of speed. For a moment I was afraid of colliding with him, I had to hit the brakes and I went long to dodge [him].

“I was improving the time with the new tyre and I was out of the top 10 for this reason.”

Giving his version of events, Lorenzo said he didn’t realise Petrucci was there but admitted he was “lucky” to avoid a major crash that could have left him injured.

He recalled: “In the motorhome I saw the images and it was scary, because just for a half-centimetre he didn’t impact my rear wheel and I don’t fly to the moon to have a big injury.

“I don’t know why he almost impacted me. I just trying to warm up the tyre as fast as possible, probably for this braking [area] I was blocking a little bit or not braking, not slow but not very late braking.

“Probably he was very close to me. When you have some rider in front of you, you must be – in my opinion – responsible for the rider in front. You must leave some space, some metres, just in case he makes a mistake.

“But I don’t think he [kept] some metres of space, and almost impacted my wheel. So imagine if I crashed, I was injured… I’m helping him to be faster and he almost hit my bike.

“If you ask him, he will say it’s my fault, but you know what I think.” 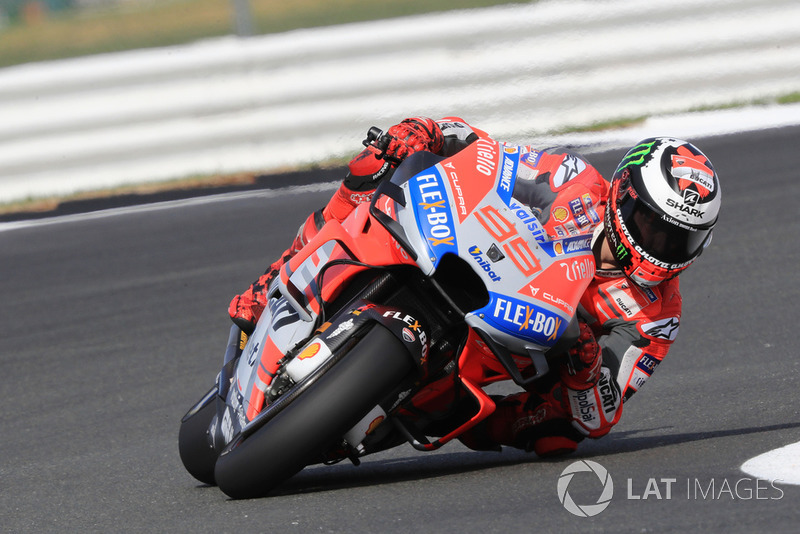