Danilo Petrucci says he was frustrated to have lost what he described as a game of 'cat and mouse' with Marc Marquez in Qatar MotoGP qualifying.

Honda man Marquez positioned himself to get a tow from the Ducati of Petrucci in both runs during Saturday night's pole position shootout, and in doing so managed to grab a place on the front row alongside Maverick Vinales and Andrea Dovizioso.

Petrucci by contrast could only manage seventh, 0.654s slower than polesitter Vinales.

Speaking afterwards, Petrucci conceded he had fallen into Marquez's trap - but said the Spaniard did not break any rules by slowing on track.

"Marc was the cat and me the mouse, and he won for today," admitted Petrucci. "He made a strategy and it worked, and I let it work.

"[In the first run] I pushed but I say, ok, I do one lap at 90 percent because I know Marc is behind and I can give him a good tow. But I know I have another chance.

"In the second run it was the same, but I had no time at the end. I waited another lap but then there was one minute left, I decided to push.

"He used 100 percent of his strategy. I gave him a tow and it was useful for him. Unfortunately for me he hasn’t done any [illegal] moves. For sure he waited a lot, but it’s racing.

"When Marc is struggling a bit, he uses everything he’s got. And this time I was one of his weapons, unfortunately!"

For his part, Marquez was open about needing to use another rider to help him out in qualifying at a track where he has often struggled in the past.

He joked that Petrucci should get used to being followed now he's a factory Ducati rider.

"This is Qatar, one of the circuits that is hardest for us," said the reigning champion. "I knew that the qualifying was going to be difficult, and in these conditions you have to be smart.

"Sometimes you have to follow someone, but other times they follow me. So welcome to the factory riders' club!"

Petrucci also admitted Marquez's speed at one of Honda's least favourable tracks was a worry for Ducati's title prospects.

"We know Marc is fast and the Honda is growing up, especially the engine is very powerful," said the Italian. "This is the worst track for them and he’s in front.

"This is I think the worst thing [about] today." 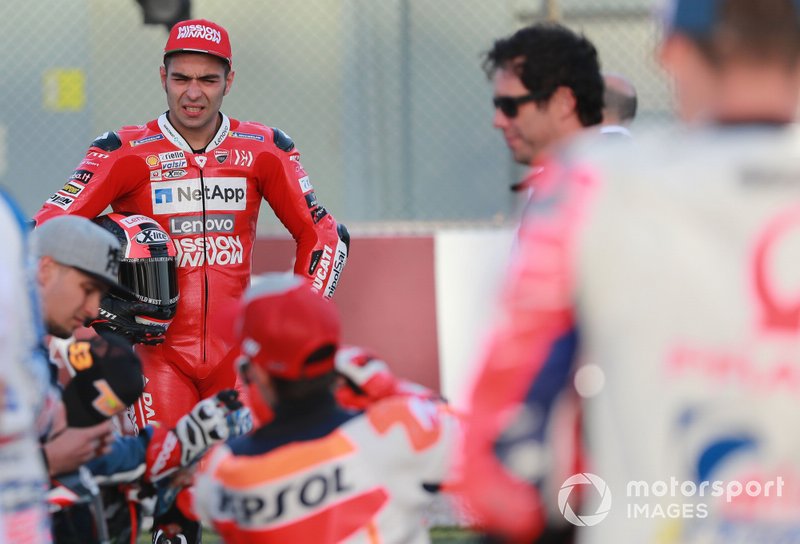