Petrucci says teammate Redding "right to be angry" about crash 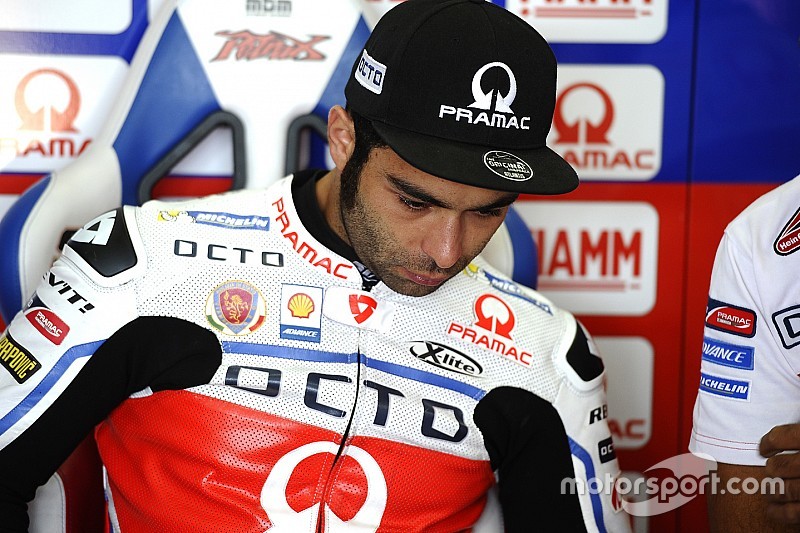 Danilo Petrucci has admitted fault in his collision with Pramac Ducati teammate Scott Redding in the Aragon Grand Prix, saying the Briton was right to be "very angry".

Having both started in the top 10, Petrucci and Redding came together on the opening lap, which resulted in the latter falling off and the former subsequently picking up a ride-through penalty.

Both of them wound up finishing outside the points, on a day where no Ducati bike made the top 10.

"When I try to pass Scott, I go side by side with him and I don't think we touched very hard but he goes wide and then he goes after the kerb and loses the steering," explained Petrucci.

"It was not a crash off my foot, but it's my foot that he went wide [off of].

"For sure, if I didn't go inside, he doesn't crash. I'm very sorry for him. It's my fault, sincerely."

Petrucci did suggest, however, that an issue with his bike might have played a part in the collision.

"I tried to brake hard, but my bike doesn't stop.

"For sure, I am very sorry to let Scott crash and it's the second time this year, it's never happened in the previous years. After Austria with Eugene [Laverty], this time at the first lap, I'm very, very sorry. He's very angry and he's right because I ruined also his race."

Petrucci and Redding are currently in a straight shoot-out for a Ducati Desmosedici GP17 bike in 2016, as only one of them is to be made available to Pramac.

Asked whether he had already talked to Redding, Petrucci said: "He's very angry, he said only to me 'thank you', I think it was ironic.

"I tried to say sorry, tried to explain it wasn't completely my fault, but for sure the result is that I ruined his race and my race. I'm very worried about this."