Petrucci "so sorry" to hamper Dovizioso in race-winning move

Italian Grand Prix winner Danilo Petrucci says he was “so sorry” about his last-lap move on teammate Andrea Dovizioso, which his fellow Ducati rider described as “very aggressive”. 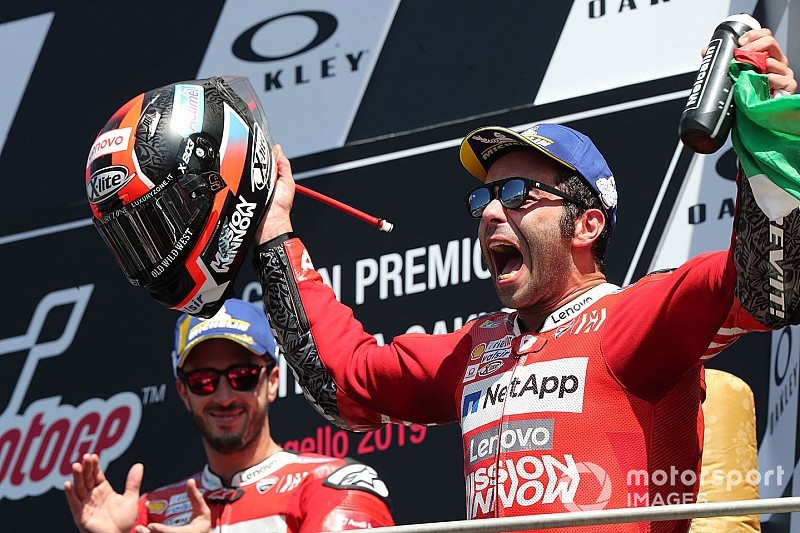 Petrucci picked up his maiden MotoGP win after a scintillating three-way scrap against Dovizioso and Honda rider Marc Marquez, which culminated when the trio went into Turn 1 side-by-side on the final lap.

Dovizioso and Marquez had slipstreamed past Petrucci on the main straight, but as they ran wide the latter launched his bike down the inside at San Donato, which forced Dovizioso to lift as he was squeezed between his teammate and Marquez.

Dovizioso – Ducati's leading rider in the championship – could not reclaim second place from title rival Marquez, and Petrucci repeatedly expressed his remorse about this in the post-race press conference.

“I knew that Marc and Andrea try to pass me on the slipstream on the straight - they did, they braked really hard, I braked a little bit earlier, and just as I was very tight on the kerb, there was just one metre and a half and I put my bike there," Petrucci explained.

“Andrea was closing the corner but I was just there. I'm so sorry for that pass. I mean, Andrea was the last person in the world that I want to [make] the bike pick up.”

Petrucci reiterated his gratitude to Dovizioso for his teammate's support and cooperation since the start of his tenure as a Ducati works rider this year.

“For sure I would like to dedicate this first victory to Andrea, my teammate, that adopted me this winter like a child, like a brother. A very, very big child,” he added through laughter.

Dovizioso stressed he was “really happy” for Petrucci, but admitted dropping points against Marquez was “bad for the championship”.

“I did a good strategy I think, I wanted to be first in the last lap, from the first corner, but Danilo overtook us very aggressive,” he recalled.

“I didn't feel there was a big space [for Petrucci], so I tried to close the door as fast as I can, but Danilo arrive in that moment so I have to pick up the bike very quickly to not touch Danilo.

“But in the same moment Marc was there, so when I pick up I have to be careful because if I hit Marc, I can crash. But at the end everything was okay.”

Petrucci, who had been ill during the Italian Grand Prix weekend, said he had doubts heading into the race as “during the past days after four or five laps I always feel very, very tired”.

The Italian insisted he was far from certain of victory even as he exited the Bucine corner in the lead for the final time, going on to beat Marquez to the chequered flag by 0.043s.

He said: “When I saw Marc and Dovi passed me [on the penultimate lap], I said 'no, another time, leading all the race and I will finish third, maybe fourth'.

“But I put fourth gear, fifth gear, I wait for Marc and Dovi, and then I put the sixth, and in that moment I crossed the finish line.”

Rossi: My Italian GP "one of the worst for a long time"