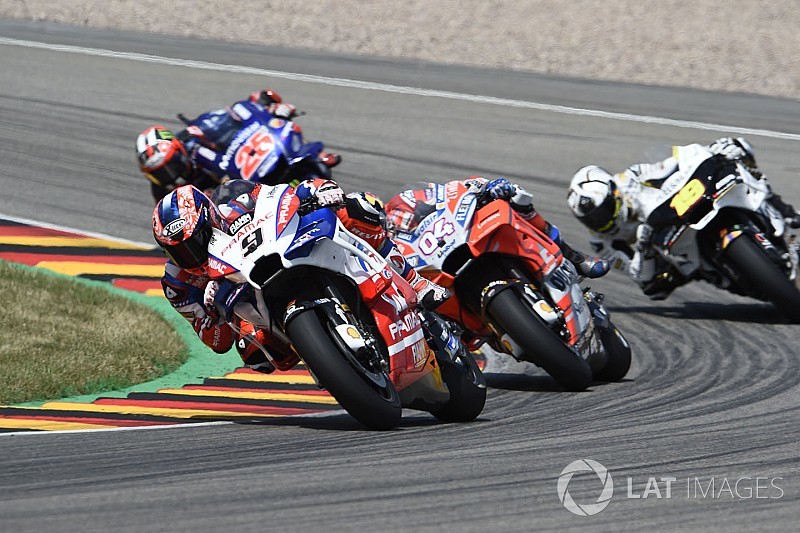 Lorenzo has been one of the strongest starters in MotoGP this year, the Spaniard consistently featuring at the sharp end in the opening stages of races.

Petrucci reckons Lorenzo's advantage stems from the Spaniard pushing from the get-go in each practice session, and that he's been trying to copy the way he works.

"He is a very good starter and if you check, he is always pushing a lot in the out-lap in all free practice sessions," said Petrucci. "He is unbelievably fast in the first lap of the practice sometimes.

"When you have to risk more in the out-lap because in the practice you don't have a laptime or you have maybe not the hottest tyre, or the tyres are not ready, he is able to push a lot.

"It is I think a way of feeling the bike. He is a champion and he got something more in some areas.

"We discover this and since a couple of races we are trying to copy his work, trying to be more efficient in the out-lap.

"But you risk a lot because if you crash in the outlap, everybody say that you are a wanker because it doesn't count nothing.

"For him, is very easy to be fastest in the outlap or in the first lap of the race."

Petrucci likened Lorenzo to former Ducati legend Casey Stoner regarding how quick he can be on the first lap of a race.

"Now he is like, you remember Stoner, he was in the first lap, he was incredible how he is fast," added the Italian.

"I think he had a lot of training on this because in the previous year when he started [with Ducati], I remember he starts so slow and then there was like a number, every lap he gained two tenths, three tenths a lap.

"For sure he worked a lot on this weak point and now he is the best doing this."

Petrucci, seventh in the standings but close behind both Lorenzo and Andrea Dovizioso, also said he is using the remainder of 2018 to prepare to his first year as a Ducati factory rider next year.

He said: "I have to work a lot of areas because sometimes I am not constant, race per race, so fighting for a good position in the championship is more difficult.

"I have some time this year to learn my weak point, and without no pressure for next year.

"I have to use this year to be my best season in my career, and then for prepare everything, especially me, for the next year."

Honda unsure how long Lorenzo will take to adapt