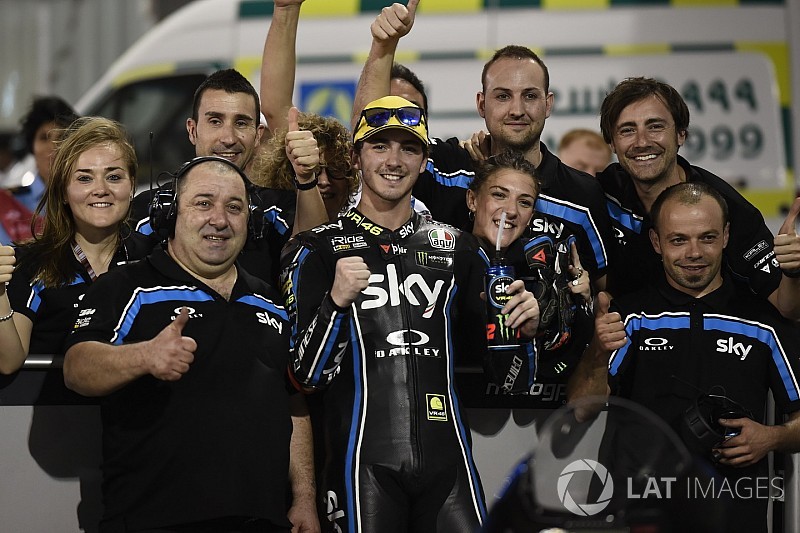 Moto2 rider Bagnaia, who scored his first win in the intermediate class last month in Qatar, will step up to MotoGP next year with Pramac on a two-year deal made directly with Ducati.

The Valentino Rossi protege effectively replaces Danilo Petrucci, who confirmed prior to the season that 2018 will be his final campaign at Pramac as he seeks a factory ride at Ducati or elsewhere for 2019.

However, Guidotti says this doesn't necessarily mean that Bagnaia will take over Pramac's current-spec Ducati, saying that such a move may not make sense for a rookie.

"We are yet to see the strategy Ducati will do," Guidotti told Motorsport.com. "At the moment it's to have one factory bike from the current year and one from the year before.

"If this continues, we will have to wait and see who gets the factory bike. Also because the our factory Desmosedici is a bit experimental, so to give it to a rookie could be counterproductive.

"First a rookie needs to ride as much as possible to get confident on the bike. So it's not determined that the factory bike is destined for Bagnaia, it may not even be helpful for him."

Risk of being caught out

Guidotti added that the rush to sign Bagnaia was partly due to the fact Pramac's current riders Petrucci and Jack Miller are both candidates for factory rides in 2019.

"We have been following [Bagnaia] for some time and he's a rider on whom you can bet for the future," he said. "Ducati thinks the same, because his contract was done directly with them.

"We have wanted to start again with a guy from Moto2 for a while now.

"This was also influenced by the statements of our riders, who rightfully aspire to a place in a factory team next year. There was a risk of being caught out and getting to June with no good solutions.

"That's why we chose to make this early move, which is not so much our style, but sometimes circumstances demand you make choices."