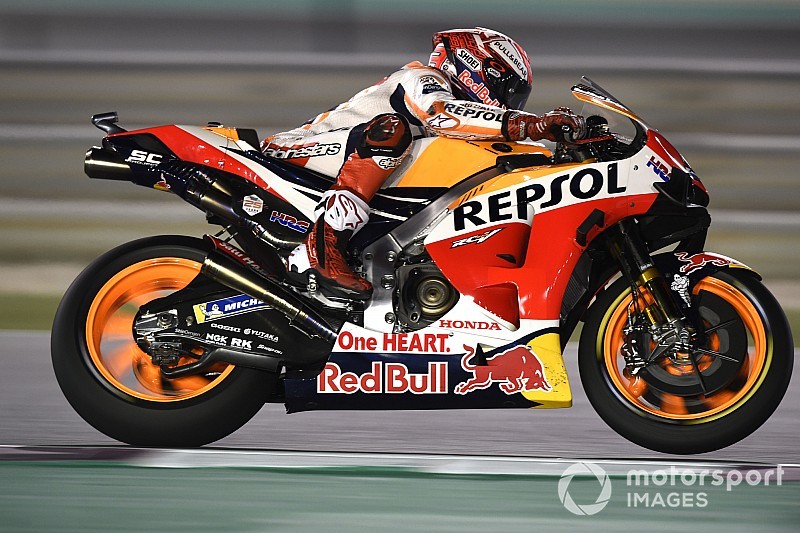 The session, held in the evening under the lights and thus more representative for the race than the daytime FP1 and FP3, was delayed by five minutes for track clean-up following ex-MotoGP rider Tom Luthi's big crash exiting the Turn 7 right-hander in Moto2 practice.

When it kicked off, Rossi's first-practice benchmark was surpassed in almost no time, as Marquez fired in the first sub-1m55s lap of the weekend on just his second flying lap.

He was briefly overtaken by Ducati's Danilo Petrucci a few minutes later, but immediately responded with a 1m54.767s to end his opening run out front.

The reigning champion remained top until Suzuki rookie Joan Mir equipped a pair of fresh soft tyres and shot up to first place from 13th with a 1m54.433s as late-session qualifying simulations kicked off.

Pramac Ducati rider Jack Miller, likewise on new softs, soon surpassed Mir, before Franco Morbidelli took his turn out front, having recovered from a high-speed Turn 1 crash earlier in FP2, which had left his Yamaha on fire.

Ducati's Andrea Dovizioso then went quickest with five minutes left on the clock, but was subsequently outpaced by Vinales.

However, Marquez crossed the start-finish line moments after the Yamaha man to go almost half a second quicker with a 1m53.380s, the new lap record.

Vinales' effort proved good enough for second, ahead of Miller and the Aussie's former teammate Petrucci.

Rookie Fabio Quartararo scored an impressive fifth, two places up on Petronas SRT Yamaha teammate Morbidelli, with Dovizioso slotting in between the pair.

Suzuki's Alex Rins fired in a personal-best at the chequered flag to move up to eighth place, ahead of Aprilia rider Aleix Espargaro and Mir.

Rins' last-gasp effort demoted Marquez's new teammate Jorge Lorenzo to 11th, as he ended the session 1.048s off the pace.

Rossi was only 17th, the only rider in the field not to improve on his FP1 lap. He and Lorenzo, as well as 13th-placed LCR Honda rider Cal Crutchlow, potentially face having to go through Q1, as posting a better laptime is likely to be difficult in the daytime third practice.

MotoGP warned of "no finishers" as Qatar keeps start time