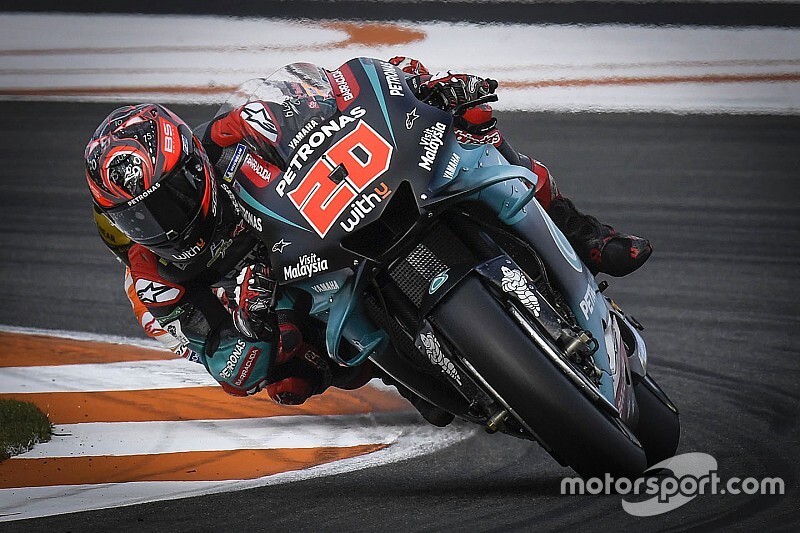 Fabio Quartararo says his "amazing" 2019 MotoGP season was spurred on by the "bad comments" made about his suitability for the Petronas Yamaha ride last year.

Eyebrows were raised when the new Yamaha satellite team signed Quartararo for his premier-class debut, as the young Frenchman scored just a single win in a mixed four-year stint across Moto3 and Moto2.

Yet by his fourth race in the premier class Quartararo had already become MotoGP's youngest-ever poleman, and by the end of the campaign he'd turned into a bona fide superstar, picking up a further five poles and seven podiums and ending the season as the top independent rider.

"I took the opportunity because everybody told us that I didn't deserve this seat in MotoGP, I wanted to prove that they are wrong," Quartararo said, adding that he "didn't mind" to have ended the season without a maiden win.

"For sure if I had a win this year would be even better, but, you know, last year I get a lot of, let's say, bad comments, that I was not ready, that I had not the experience to be in MotoGP.

"But I worked a lot during the winter, during the tests, and we managed to get seven podiums, poles, and I think we deserve the place that we have today. I want to thank all of them [in the team] because they believed in me and we make an amazing job during this season."

Quartararo's sophomore rider teammate Franco Morbidelli finished the campaign in 10th place - and though he'd become a regular fixture in the top six in the latter half of the season, he was overall comprehensively outshone by his rookie rival.

"From Misano, from Silverstone, we started fighting from the top five pretty much every weekend, apart from Australia I think, so that's quite a good level," Morbidelli said.

"I'm happy overall of this year, especially about the second half. Maybe too many falls but sometimes you have years like this, but overall I'm happy."

Asked if he'd found Quartararo's emergence difficult to deal with, Morbidelli said: "Of course it was difficult - I think it was difficult for everybody. He came out like a mushroom [from the ground], doing great results, great performances, super fast laps, unbelievable. Of course was difficult at the beginning, but then it's just another guy in the bunch.

"He earned what he achieved this year, he's our reference, and I will try to work my ass off to arrive next year well-prepared and ready to give battle, not just to Fabio but to everybody else on the grid."

Quartararo was second-fastest in testing in Valencia and ended the Jerez run in fifth, while Morbidelli was fifth and seventh in the two respective tests.