Quartararo was "waking up from pain" the night before Dutch TT 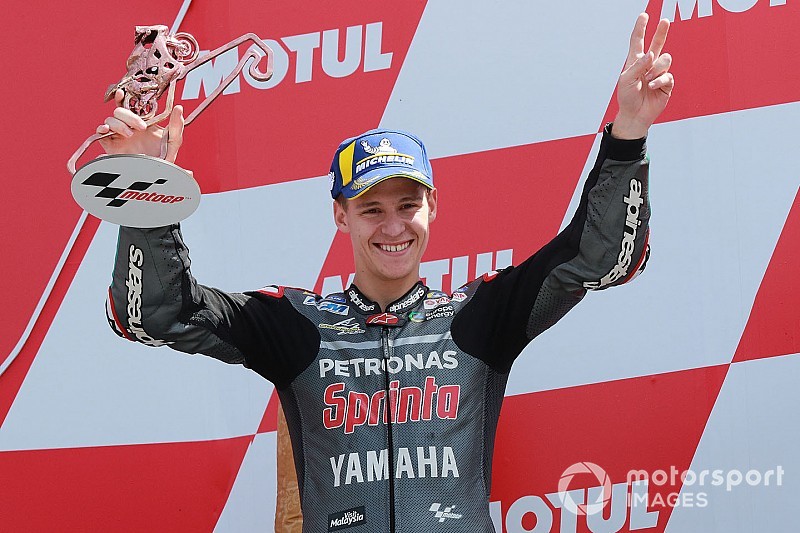 MotoGP Dutch TT podium finisher Fabio Quartararo admits he didn't think he'd finish the race, as he was “waking up from the pain” in his arm the night before the 26-lap Assen race.

The Petronas SRT rider led for the first time in his MotoGP career at Assen, hitting the front on lap three and staying there for the next eight tours before eventually dropping to third as fatigue in his arm set in.

Quartararo underwent arm-pump surgery on his right arm prior to the Barcelona race in order to be fit for the physical Assen, but says his arm was “not even 90 percent” ready during Friday practice.

Revealing afterwards to MotoGP.com that he had taken some painkillers prior to the race, Quartararo says his arm was still “destroyed” by the time eventual race winner Maverick Vinales passed him.

“This morning I said for sure I can't finish the race, because [early] this morning – also last night – I was waking up from the pain,” he said.

“This afternoon I took some pills and [the arm] was much better for the race, [but] when Maverick overtook me I was already destroyed.

“Fortunately our tyres were still perfect. It's OK, because we finished on the podium, learned many things today and can't wait to be in Germany.

“Yesterday we took out a lot of liquid from the arm, a lot pain. I thought in Barcelona I will arrive here 100 percent for sure, but when I made my first lap I was not even 90 percent.”

Quartararo branded his stint in the lead of the Dutch TT as the “best moment of my life”, and says it was bigger for him than his debut podium last time out in Barcelona.

“I think it's the best moment of my life, more so than my first podium,” he added.

“I was thinking one moment; when I was a kid, I was watching this race and watching the first group, the guys that were leading, and to day I was leading my first race in MotoGP – and for more than one lap.

“I think I led nine or eight laps, but for me it was a really special feeling, and I'm really grateful to be on the podium.”

Though the German Grand Prix is just a week away, Quartararo believes that race will be “easier” on his arm due to the Sachsenring's anti-clockwise layout.

“I think [the Sachsenring race] will be really great, because today when I had time to rest it was on the left side.

“So I can really straighten my arms and riding normal, and Sachsenring is all left [corners].

“We know Marc [Marquez] is fast there, but for my physical condition it will be much easier there in Germany than here in Assen.”

Vinales relieved of "a lot of pressure" after Assen win