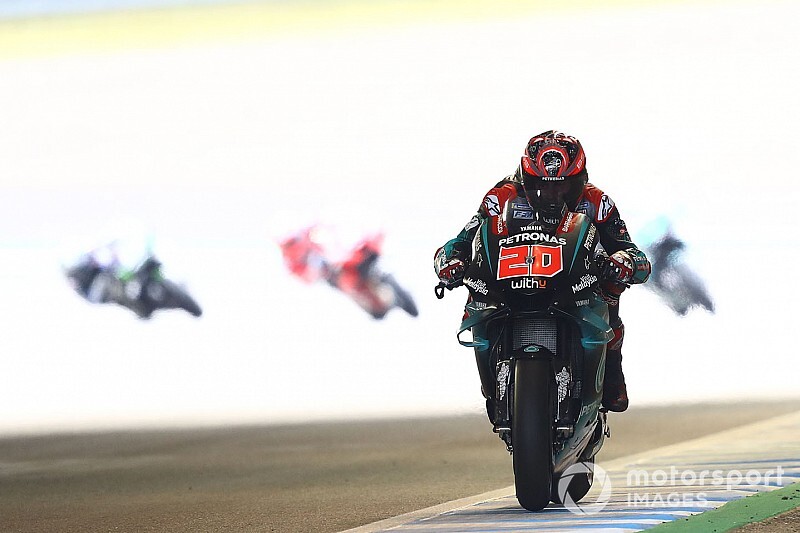 MotoGP rookie sensation Fabio Quartararo has revealed that he has already virtually doubled the pre-season points target that had been put to him by his Petronas Yamaha team.

Quartararo’s second-place finish at Motegi on Sunday secured him the rookie of the year title, and he is now just 13 points off of third-place in the standings with a current total of 163.

"Really pleased, because in Malaysia test we set a goal, was to score between 50 and 90 points, and be rookie [of the year]," he said after Motegi.

“Actually it [the points tally] is much higher than what I expected. I'm really happy for the team because it's our first year - my first year in MotoGP but also the first year for the team."

Quartararo had led briefly on the opening lap at Motegi, but was quickly re-passed by eventual race winner Marc Marquez - who the Frenchman admitted was "much faster than us".

He said however that following Marquez, albeit at a distance, allowed him to adapt how he rode through Turn 1 compared to the rest of the weekend by copying the Honda rider’s line, which helped him to preserve his rear tyre longer.

“Actually Marc’s pace was faster than us this weekend, but I analysed some lines [for] what we missed, and I think for saving the tyres it helped me a lot," he said.

“Like corner one, during the qualifying, practice, I was carrying much more speed, and in the first corner I was going wide.

“I was doing the same line as him [Marquez in the race] and I think [this] helped us quite a lot to save the tyre.

“I wasn't close enough to see exactly what we missed, but it's true that acceleration, also with used tyre, we struggle a lot, so that's an important point to improve.

“Again a race that we learned to manage the tyre, even if at the end we struggled, we managed to get good laptimes in another way, and I think that's something that we learned mainly here.”

Once Quartararo began to struggle to keep his soft rear tyre in shape towards the end of the race, he had to push hard to keep a charging Andrea Dovizioso at bay.

“At the end Dovi was four seconds behind, but he came [at me] like a bullet.

“Was really not easy to keep this second place because on the last lap I was pushing like it was for a victory, because it was really important points for the championship.”

Dovizioso braked "like a stupid rider" in Quartararo chase