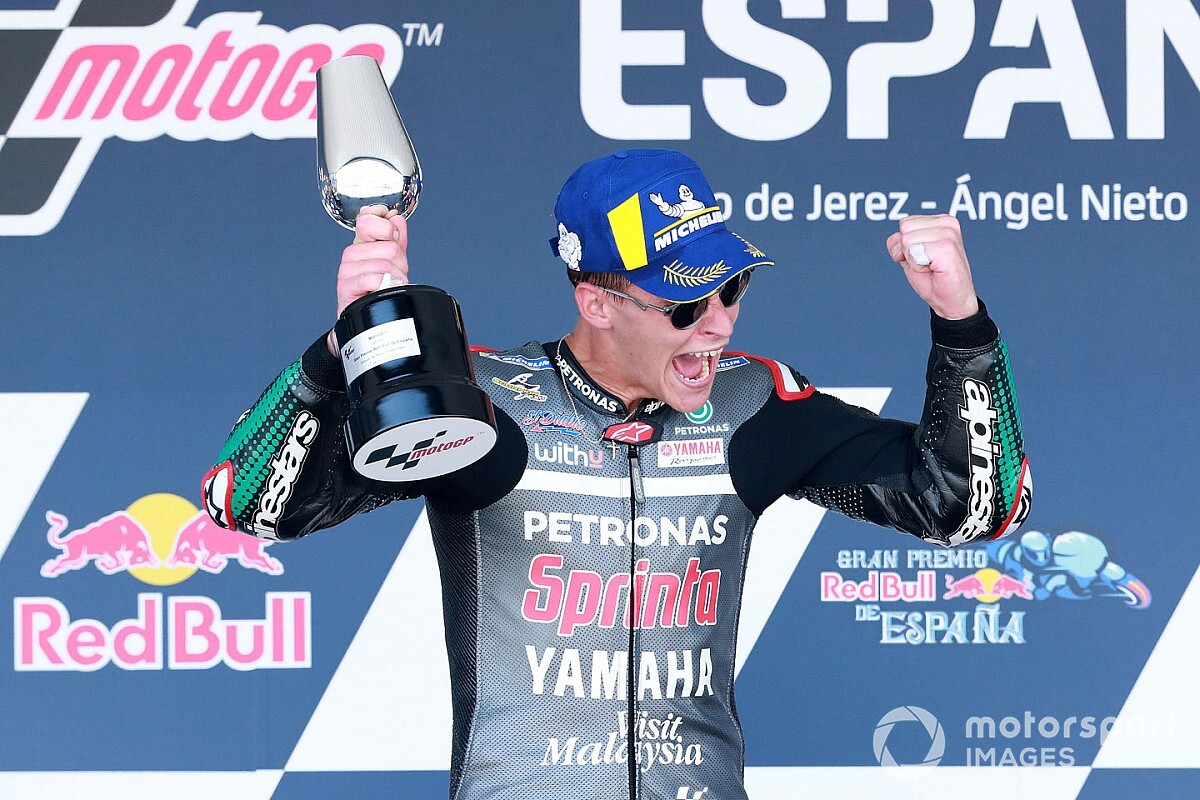 Maverick Vinales utilised Yamaha’s new holeshot device to seize the lead from second on the grid, and tried to build a lead immediately using the added grip of the soft front tyre he and teammate Valentino Rossi gambled on.

But Marquez went with the Yamaha rider and engaged in battle on the third lap, scything his way up the inside at Turn 5 but running wide.

Marquez used the power of the Honda to draw alongside Vinales in the run into the Pedrosa corner and took the lead.

Displaying devastating race rhythm in FP4, Marquez already began to settle into a rhythm Vinales couldn't match when he lost the front of the Honda through Turn 4.

Pulling a miraculous save and keeping the bike upright, Marquez managed to rejoin in 16th while Vinales was released into the lead.

However, Vinales’ hopes of victory faded along with his soft front tyre as he began to struggle, allowing Quartararo and Jack Miller on the Pramac Ducati to close right in.

Quartararo took the lead away from his Yamaha stablemate at the last corner on lap nine, while Marquez had recovered to 10th and was on podium pace.

The Petronas Yamaha rider instantly used the cornering ability of the M1 to ease away from the chasing pack, his lead standing at six seconds at one stage before he eased off in the last laps.

Marquez’s charge through the field was merciless, and with five laps to go the world champion had dispatched Miller for third, with the ailing Vinales firmly in his sights.

Right on the tail of Vinales on lap 22, the rear of Marquez’s Honda let go as they rounded Turn 3 and the Spaniard clattered into the ground.

Put into a neck brace and looking in considerable pain with his arm, Marquez was loaded into the back of an ambulance.

Quartararo didn’t put a foot wrong over the final laps to ease to his maiden win at the start of his sophomore campaign to end a drought for France in MotoGP dating back to Regis Laconi’s Valencia victory in 1999.

It’s also the first race win for a satellite Yamaha team in the MotoGP era.

Vinales held onto second at the chequered flag, while Andrea Dovizioso put his works team Ducati into third after a late move on Miller.

Johann Zarco’s first race for Avintia Ducati ended with an 11th-place finish, while Alex Marquez was top rookie on the Honda in 12th ahead of Brad Binder (KTM), Tito Rabat (Avintia) and Aprilia’s Bradley Smith.

In a race of high attrition, Valentino Rossi dropped out with a technical issue late one, while there were crashes for Joan Mir on the Suzuki, Tech 3’s Iker Lecuona and Aleix Espargaro (Aprilia).

Crutchlow ruled out of Jerez MotoGP after warm-up crash