Analysis: Should Marquez fear for his perfect German GP record? 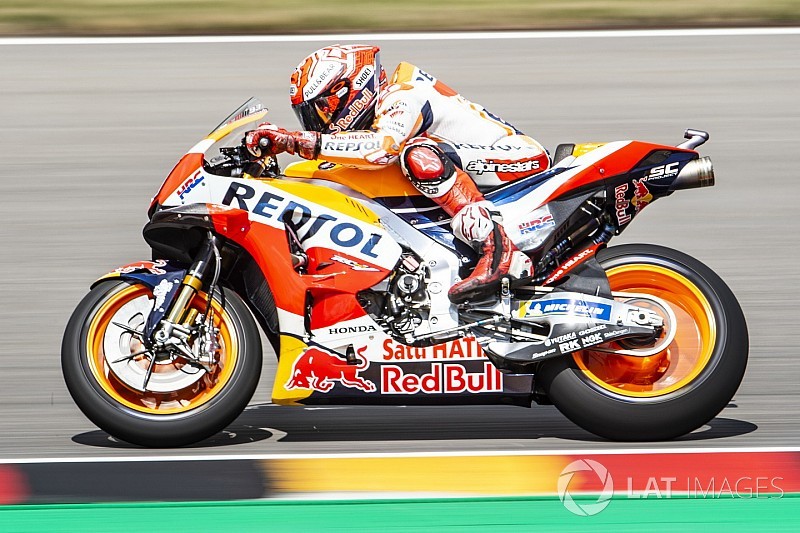 Sachsenring master Marc Marquez had to fight hard to preserve his German Grand Prix qualifying streak - and there's no reason to think he'll have it much easier on race day.

As surely as night follows day, Marc Marquez reigns supreme at the Sachsenring. There are other tracks where the Spaniard excels – certainly COTA springs to mind – but the German Grand Prix venue is special in that Marquez's dominance transcends classes and conditions.

Starting from 2010 in 125cc, he has won every race he's contested here from pole. And should the Sachsenring indeed drop off the calendar next year, then Marquez will have a chance to seal this streak, secure it for good, when he lines up on pole yet again this Sunday.

But, whisper it, doesn't he look more vulnerable than usual here, a strange contrast to how good Marquez has looked at some of his weaker tracks in 2018?

The pole streak remains, but it took a last-gasp improvement in Q2 to keep it alive by just 0.025 seconds. He topped none of the practice sessions, which is a first, and languished down the order in race pace simulations in FP4.

So is he really in trouble, or are such suggestions just false hope that the already dominant championship leader won't end up even further ahead heading into the summer break? 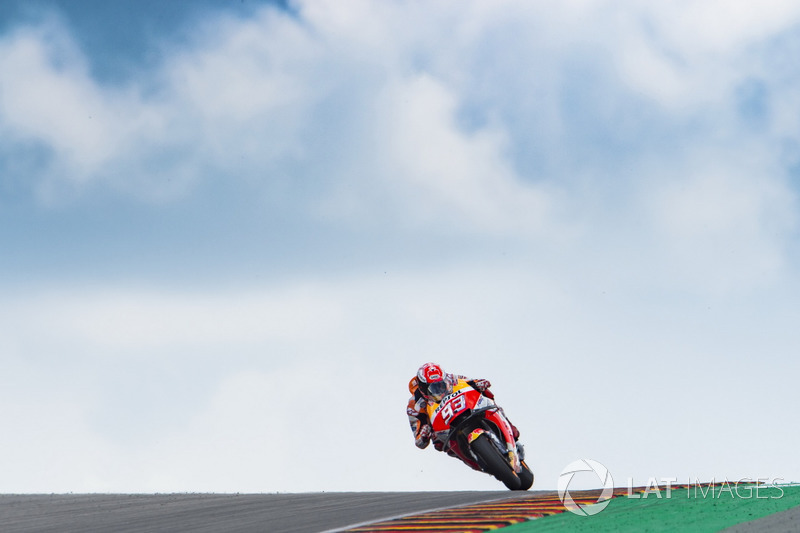 The truth probably lies somewhere in the middle, but the level of uncertainty is high heading into the race. With a 30-lap distance and tyre drop-off a major factor, a strategic race is all but certain – and many riders expect the early laps to feature an Assen-like pack, before tyre management determines the outcome later on.

“But we will see, because with the new tyre, like we see on the qualy, everybody's fast.

“The first 10 laps, everybody's fast, everybody has a good pace, then after lap 10, after lap 15, is when it starts to be more complicated to ride the bike.”

If Marquez's prediction is correct, he's better prepared than most for the crucial laps, having logged a lot of mileage on used tyres – which was a factor in his lowly FP4 position.

Across the weekend, Marquez seemed to be able to run 1m21.2s initially, before moving to a mid-to-high 1m21s range as the race approaches and passes the halfway point. On tyres with over 20 laps of wear, he was managing a low-1m22s across Friday.

This should at least comfortably leave him as the best of the Hondas. Dani Pedrosa was badly off the pace on Friday, but seemed to snap out of it on Saturday and ran a competitive pace, although he started off no higher than a 1m21.6s and slipped into the 1m22s margin earlier.

The same is potentially true for LCR's Cal Crutchlow, although his pace decline in FP4 was sharper, the Briton arriving at 1m22s after 10 laps. 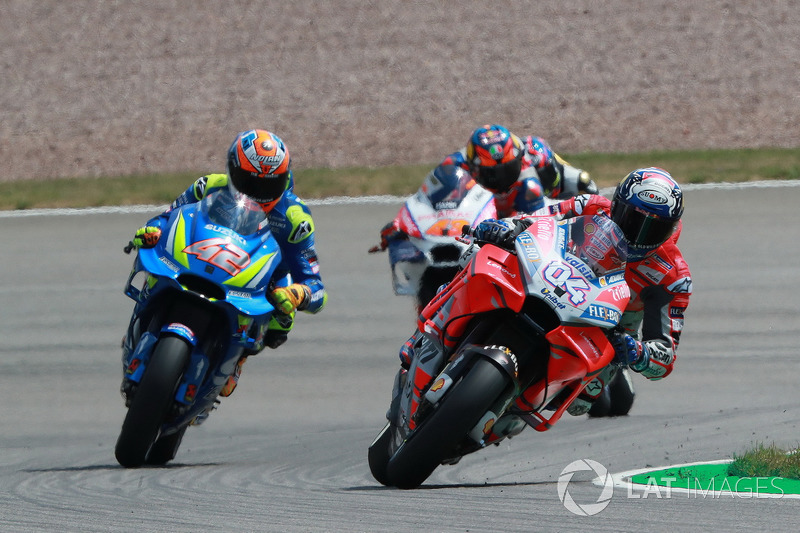 The Sachsenring is traditionally a Honda track, but this year the Ducatis are likely to trouble Marquez more than his stablemates, having made significant gains overnight.

Andrea Dovizioso led the way in race pace simulations in FP4, running in the low-to-mid 1m21s margin before dropping off at a similar, perhaps marginally faster rate than Marquez.

“In the afternoon we did a small step, we showed really good speed, I think. We have the same speed as the fastest rider. But [that's] for the first part of the race.”

Dovizioso suggested that the latter stages would be a step into the unknown: “For the second part, I think nobody really know what will happen, because the [tyre] consumption, I expect for everybody there will be a very big consumption, more than normal.

“If that will happen, it will affect the race a lot. What everybody sees about their speed on paper, maybe will be wrong.”

The numbers for Jorge Lorenzo suggested a very similar pace, and it left the Spaniard feeling that a victory was “not impossible” and a podium was “quite possible”.

The third GP18 rider in the field, Pramac Ducati's Danilo Petrucci, starts between Marquez and Lorenzo on the front row, and should feature up front early on if he avoids a poor start.

However, tyre consumption has long been an issue for the Italian, and he did not do enough running on old enough tyres to draw a conclusion on whether he'll be affected more than the other Ducatis. 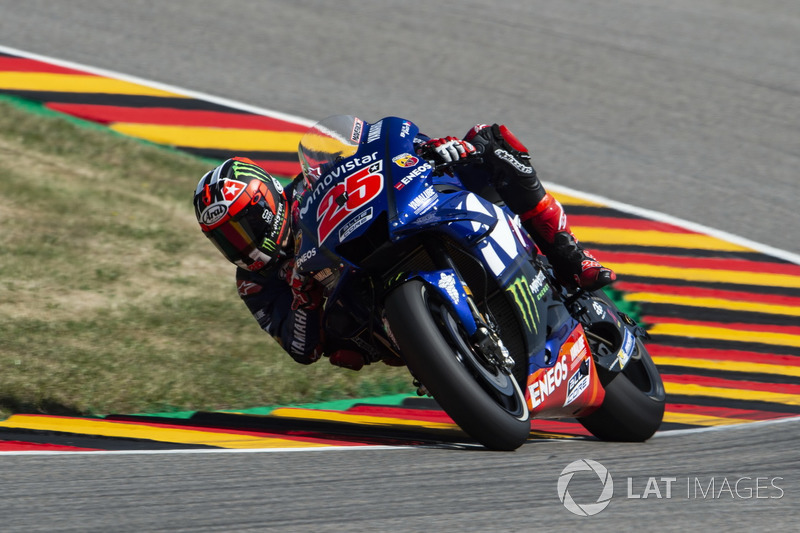 Rear tyre drop-off in hot conditions is normally bad news for Yamaha, although Maverick Vinales has excelled in the later stages of races this season.

The problem for Vinales has been poor starts and a lack of immediate pace, and FP4 suggested the latter might very well be an issue again. He started his run in the high 1m21s but was able to hit those laptimes – and go even slightly quicker – for more than half the race distance.

“I think our stronger point will be in the middle, at the end of the race, so let's see.”

Teammate Valentino Rossi has stronger initial pace, but did not run his tyres as long as Vinales on Saturday. His pace was quite consistent on Friday, but it was also nowhere near as good.

“Today I was a bit more competitive already from this morning and my pace is not too bad,” Rossi said. “Also it is not the best, that is for sure.”

Tech 3's Johann Zarco would also normally be a factor, but he is off-form and looks incredibly unlikely to repeat former teammate Jonas Folger's 2017 heroics, especially from 13th on the grid.

As for the Suzukis, they largely forwent running on very used tyres on Saturday. Alex Rins' pace looks consistent, solid if unspectacular, while Andrea Iannone should be capable of starting strongly, but could be left to rue tyre drop-off woes yet again. 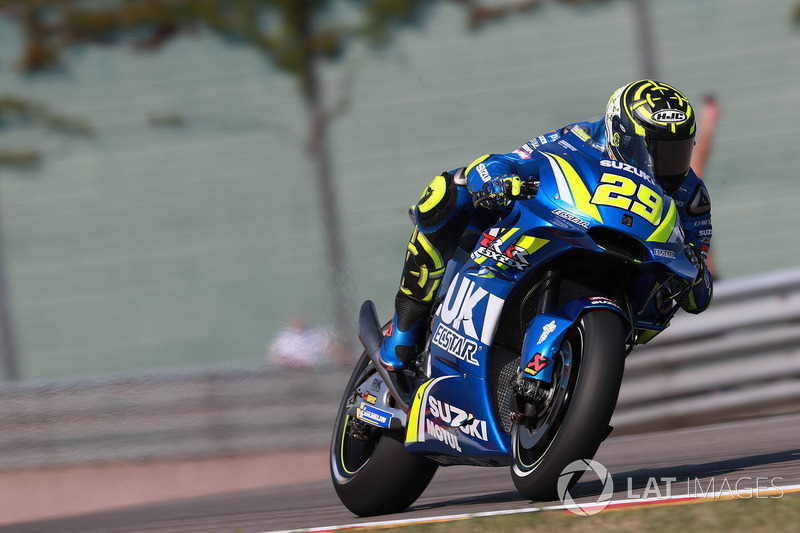 The choice of the rear tyre will also be a big factor in the outcome, with many riders unsure whether to run the soft or medium. But this is unlikely to change the overall character of the race.

Riders predict a pack start and tyre management to be decisive, which will be familiar to anyone who's watched Assen – even if the drop-off is likely to happen much sooner here.

But while Marquez checked out in Assen, and might very well have the pace to do that here, he will also recall that he had take a lot of risks in the pack, and was very nearly knocked off the bike by Rins.

Even if he has the ultimate pace, there are still lots of ways Sunday's race could go wrong for the championship leader.