MotoGP’s British Grand Prix has been cancelled due to torrential rain at Silverstone after hours of delays.

Despite the efforts of race organisers to avoid forecast rain, which led to the race being rescheduled for 1130 local time instead of 1300 as originally planned, a downpour at the Northamptonshire track meant the race could not be started.

The pitlane opened at 1110 and riders went on their sighting laps, but it became clear that conditions would not be safe to race in owing to the sheer volume of water on the track, not helped by the freshly relaid track surface not draining properly in certain areas.

A meeting was held between Dorna, IRTA and team officials, during which the proposal to postpone the race to Monday – supported by some teams and riders – was ruled out, due in part to a lack of available marshals.

Silverstone declared its intention to start the race at 1330, weather permitting, and shortly before this time Dorna announced a planned 1400 start and a reduction in race distance from 20 laps to 16, subject to a track inspection.

It was subsequently announced the start would be “delayed until further notice”, before a fresh inspection was planned for 1500. But with the rain still not abating, it was finally announced at 1600, after a riders’ safety commission meeting, that the race would not take place.

The Moto2 and Moto3 race, scheduled to take place after MotoGP, were likewise called off.

Riders made it clear on Saturday they would not be prepared to race in conditions seen during fourth practice, which was marred by a multi-rider incident at Stowe after a heavy downpour.

Tito Rabat fell and was hit by Franco Morbidelli’s bike, resulting in a triple fracture to his right leg. The Avintia Ducati rider was airlifted to hospital and underwent surgery, the accident resulting in a one-hour delay to qualifying.

The last time a premier class race had to be cancelled outright was the 1980 Austrian Grand Prix, which was called off due to snow - although the 2011 Malaysian GP, where Marco Simoncelli was killed in a crash, was also deemed not to have occurred in the official statistics. 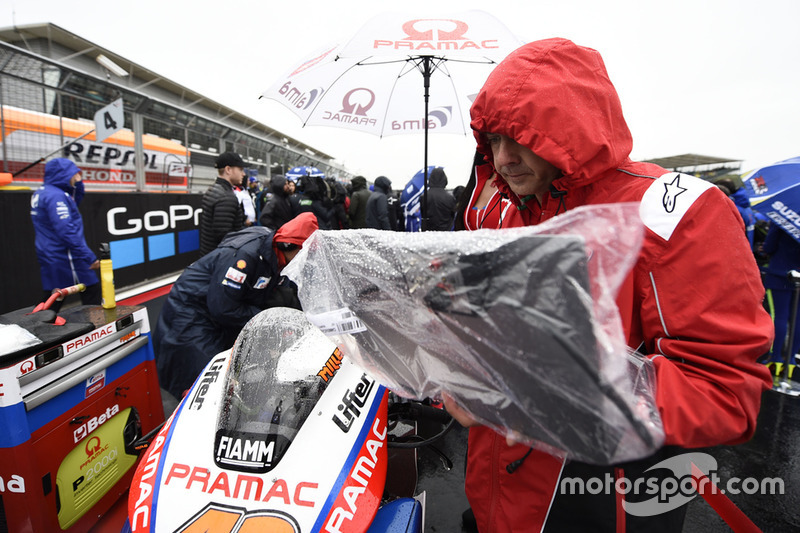