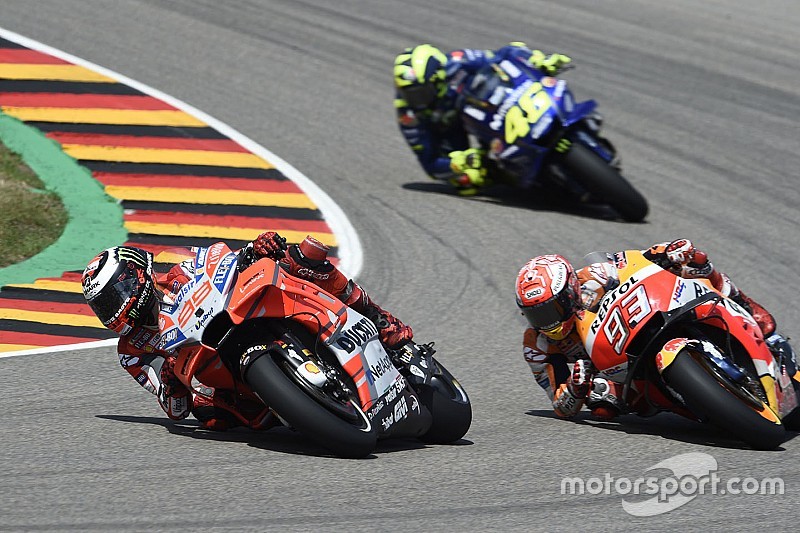 Leading MotoGP riders believe that the championship should have a longer summer break than this year's three-week hiatus.

The MotoGP season has traditionally featured a break of at least four weeks between the Sachsenring race in July and the Brno race in August.

However, just three weeks separate the two events this year, as the calendar was expanded to 19 races.

In addition to that, the annual World Ducati Week was held at Misano during that period, leaving the Italian manufacturers' riders only one week of rest, while LCR Honda's Takaaki Nakagami also raced in the Suzuka 8 Hours, which took place last weekend.

Jorge Lorenzo revealed that he only had three days off in the summer, and the Spaniard called for a "one-month break minimum" in future seasons.

"I just have three days [of rest] before I had to leave to Misano for World Ducati Week, so my holidays were very short this time," said the Honda-bound rider.

"It’s good to have a lot of races because it’s our passion, it’s our job, but it’s difficult for resting and to recover from one race to another.

"Honestly three weeks of resting in the middle of the championship is not so much. It would be better to have one month minimum and to have a test in the middle. It’s better than just three weeks which is finally two weeks."

Points leader Marc Marquez added: "We already speak a little bit about this, will be important maybe to increase one week more, the holidays.

"Was very short summer break, for us was like one week and half, because you need to be fit to start the second part of the season, two races in a row.

"Every year we have more races, but I know that Dorna is working on the calendar, because I think will be important for everybody."

Valentino Rossi on the other hand feels a shorter summer break is a worthwhile trade-off to have fewer back-to-back races, with only the Czech and Austrian races and the Asian triple-header events occurring consecutively in 2018.

“For me, it's good, the calendar of this year, because we don't have a lot of races in a row," he said. "So you have always one week stop, so it's good to prepare the next race in the perfect way.

"But I agree, one week more everybody would be happy I think, next year we need one more week.

Andrea Dovizioso said he wants the off-season to be longer instead of having more time off in the summer.

He said: "I don't have any big problem [with the summer break]. If I can change something, if we want to speak about that, but for sure will not happen, the championship is too long.

"For me is not important to make a bigger break in the middle of the championship. If I can decide to change something, it is to have from the first test to the last test, have to be a bit shorter.

"But the championship is going with more races, so it will not happen."

Espargaro fit to ride at Brno after Sachsenring crash