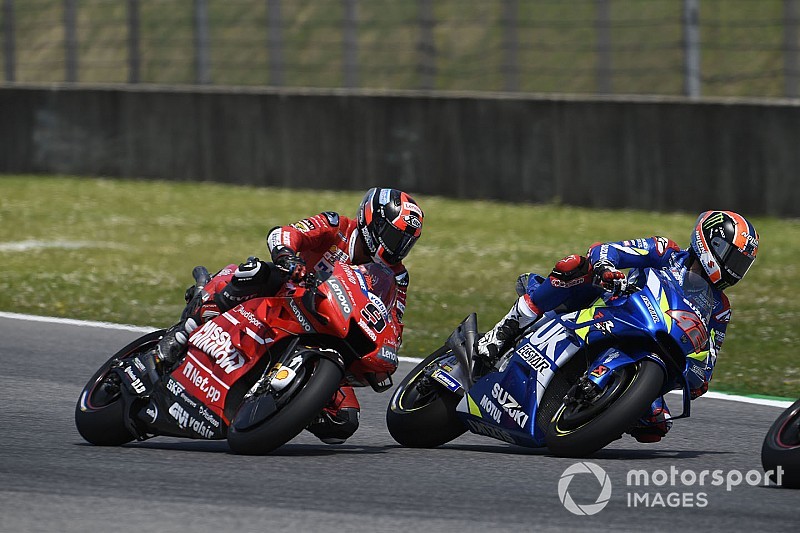 Suzuki MotoGP rider Alex Rins admits he felt disappointed to finish fourth at Mugello, having had “rhythm to win the race” despite starting only 13th.

Rins was eliminated in the first qualifying segment on Saturday, but scythed his way through the pack in the opening laps of Sunday's race.

He spent the entire race from then on in the front pack, and even led a lap, but his GSX-RR was ultimately powerless to compete with the Ducatis of Danilo Petrucci and Andrea Dovizioso and the Honda of Marc Marquez on the main straight.

Settling for fourth, the Austin race winner now sits 27 points behind Marquez and 15 points behind Dovizioso in the riders' championship.

"Before the start of the race, we already know that this track will be difficult for us for this long straight," Rins said.

"For sure after crossing the finish line on P4 I was disappointed because I think I had rhythm to win the race, but anyway we finished in fourth position in a track that we struggle a lot for this long straight.

"In Qatar and here that was two tracks very difficult [for Suzuki], we finish on the fourth position, we beat some Ducatis, we beat some Hondas, so it's okay."

Mugello continued the trend of poor qualifying performances for Rins, but the Suzuki rider said this proved irrelevant in the Italian Grand Prix.

"Doesn't matter the position on the start," he insisted. "For sure helps starting more on the front, but crossing the finish line on the first lap, recovering a lot of position, this one doesn't matter."

Instead, Rins said his top-speed deficit was the main factor that hampered his victory chances, as he reckoned he was unable to even stay in the draft of the Ducati and Honda bikes ahead.

"This track for me, for me and for all the team but basically for me, was very physical," Rins said. "The physical demands are much higher.

"I was not able to do any mistakes, because we arrive into the final straight, maybe [losing] 0.3, 0.4 [seconds], I was recovering everything on the corners.

"It's very difficult to improve the [top] speed in our case because we have closed engines and everything, but we can improve on the aerodynamics for example, on the wheelie area, on the resistance with the air.

"So for sure Suzuki are working on that and they will bring new components."

Petrucci will now "do everything" to aid Dovizioso title bid