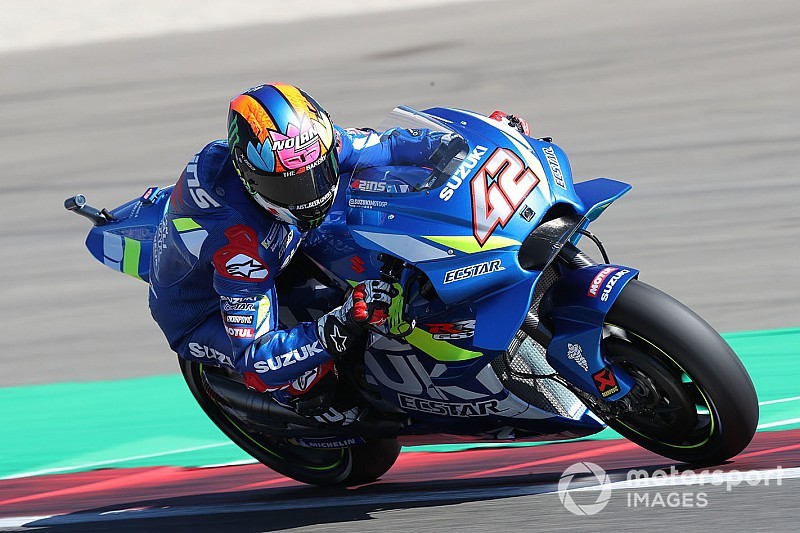 Suzuki's Alex Rins is “convinced” he could have fought for MotoGP Dutch TT victory if not for the “strange” crash he had at Turn 9 while leading on the third lap.

Rins jumped to the front off the line and led a Suzuki one-two from teammate Joan Mir, before losing the front under braking for the Turn 9 left-hander of De Bult.

He says the data showed that he had a slight wheelie exiting the corner before the crash while braking only slightly later than he had been doing all weekend, and believes the wind played a factor.

“Was a shame, because – we check the data – we did a little bit more of a wheelie on the corner before, at Turn 8,” said Rins, who drops to 59 points adrift of the championship lead.

“Then I tried to brake on the same point as in FP4 or warm-up, and I lose completely the front.

“For sure I think the wind [played a part], because it was going in front of me. After the wheelie, the front was on the floor.

“So this is [not] as problem, but then I was braking on the same point and [I had a] strange crash.

“I braked a little later than normal, but not 10 metres later, just a little bit. This is MotoGP, you need to brake on the same point, open the gas, pick up the bike, full go.”

Rins says his feeling on the bike prior to the crash was “better than ever”, and is convinced he would've been in the mix for his second win of the season.

“Yes, this was my strategy,” he added when asked if he intended to break away from the pack.

“I knew that if I was in front and I was pushing, I will cut the group [down] because the Ducatis were more on the limit.

“Was a shame, because I am convinced that our pace [was good enough] to be able to follow Maverick [Vinales] to fight for the victory or second position.

“Anyway, the result is like this. We did a good weekend on my side, and also Mir, qualifying really well.

“He made some mistakes in the race, but as I said, it was a shame because we were able to do a good result.

“We lost the chance to win for sure. Our rhythm was nice. Now we will never know if I would win or not, if I was beating Maverick or not.”

Quartararo was "waking up from pain" the night before Dutch TT