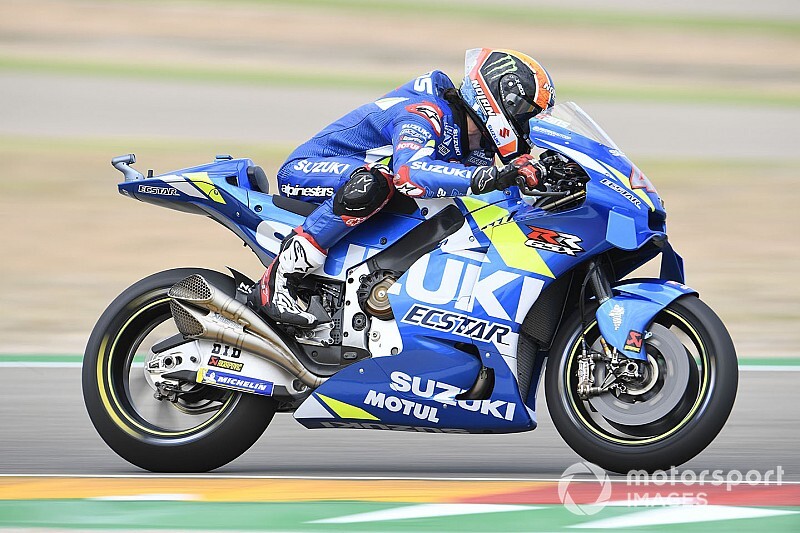 Suzuki's Alex Rins topped a damp third MotoGP practice at Aragon, having been one of only three riders to use slick tyres during the session.

The track was drying out slowly from morning rain at the start of the session, and wet tyres were thus the preference for almost the entirety of FP3.

The mixed conditions allowed some unusual names to lead early on with both KTM's Kallio and then Suzuki's Joan Mir topping the timesheets for about 10 minutes each.

As the final 15 minutes began, only Fabio Quartararo (Petronas Yamaha) was out on the circuit and the Frenchman gradually made his way to the top of the order, outpacing Mir by a tenth.

But soon the majority of the field was back on track and Kallio was again on top, beating Quartararo's time by over a second, and forming a KTM 1-2 with Miguel Oliveira at one point.

Kallio couldn't hold on to first place however as he was demoted by Vinales, before Rins - who gave slicks a go along with Franco Morbidelli and Hafizh Syahrin - went another second faster.

Rins ended the session on top with a 1m55.934s with Vinales and Kallio completing the top three.

Despite topping the session, Rins will still needs to battle through Q1 as he was only 11th fastest in dry conditions on Friday.

Morbidelli jumped up to fourth at the end on slicks with Oliveira bringing a second KTM into the top five.

Francesco Bagnaia (Pramac Ducati) and Yamaha's Rossi were sixth and seventh respectively ahead of wildcard Bradley Smith, the only Aprilia to set a laptime in the session.

Quartararo and Mir ended up completing the top 10.