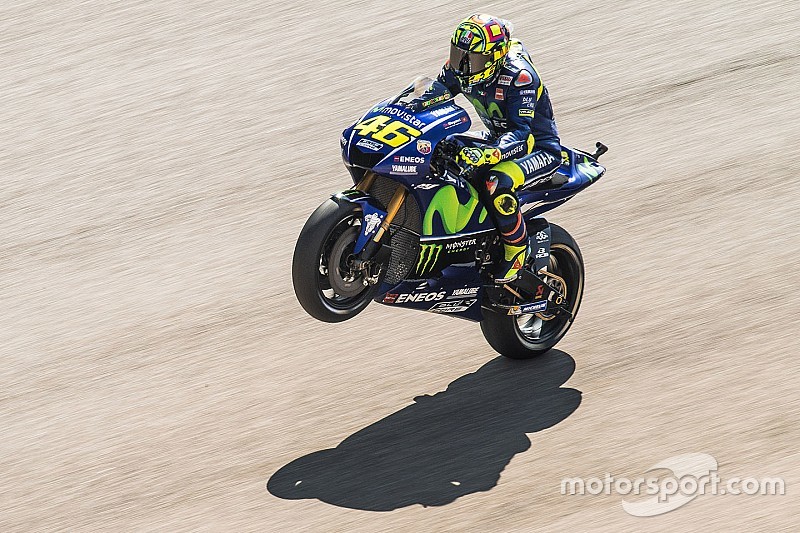 Rossi broke his leg in a training accident on August 31, but, after missing his home round at Misano, he managed to return to MotoGP action just 22 days following his crash on Friday at Aragon.

The 38-year-old stunned the paddock when he qualified on the front row on Saturday before finishing fifth on Sunday, just under six seconds adrift of race winner Marc Marquez.

Rossi was running second behind Jorge Lorenzo after the start for 11 laps, and Maverick Vinales said at that point he even expected his Yamaha teammate to go on and take a sensational comeback win.

"He did a really good race, honestly when I saw him at the front, I thought he’d win the race for sure," said Vinales.

"If he’s strong at the beginning, I can imagine at the end... because normally he comes better at the end. He came back strong like always, especially in the race.

Marquez, who passed Rossi mid-race on the way to scoring his fifth victory of the season at Aragon, said he was impressed by Rossi finishing right behind teammate Vinales.

"Already incredible to be here after this kind of fracture, I think nobody did [expect it]," said the championship leader. "His talent makes the difference.

"Also incredible that he finished only five tenths behind Vinales with the same bike, because he is still injured."

Lorenzo, who was third behind the Hondas of Marquez and Dani Pedrosa, added the rate of Rossi's recovery at the age of 38 was "impressive".

The Ducati rider said: "It's impressive all the weekend. The way he qualified, but especially the way he recovered.

"It's not the same, the body of a 38-year-old and the body of a 15-year-old, that all the recovery's much quicker. And it's impressive, no? I think he felt better day-by-day.

"And like Marc said, just some tenths from Vinales, who has perfect, in a track that's not one of his favourites, very impressive."