Marquez will be "very difficult" to beat to title - Rossi 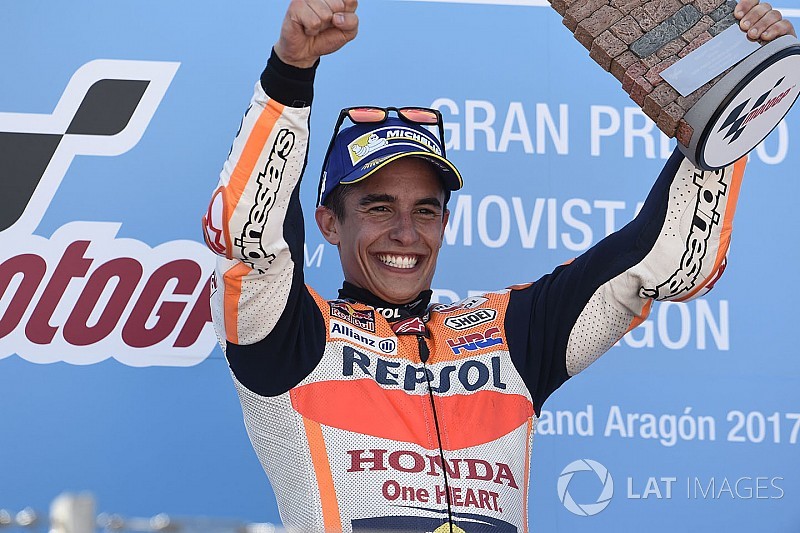 Valentino Rossi reckons it will be "very difficult" for anyone to deny Marc Marquez the 2017 MotoGP title, following the Spaniard's Aragon Grand Prix victory.

Marquez's fifth win of the season at Aragon has given him a lead of 16 points in the championship over Andrea Dovizioso, with whom he was tied prior to the weekend.

In the last six races, the Honda rider has taken victory in four, only narrowly missing out on another at the Red Bull Ring, and was also among the contenders at Silverstone before his engine failed.

Rossi believes Marquez's latest win at Aragon, which allowed him to take the points lead, is a "very big step", and that his main rivals - Dovizioso and Maverick Vinales - will struggle to stop him from now on.

He added the turning point for Marquez was a private test at Brno during the summer break, prior the championship's visit to the Czech track that kick-started the second half of the season.

"I think for the championship now for the opponents is very difficult," Rossi said. "[His Aragon win is a] very big step.

"Looks like after Brno, the test, they improved a lot the performance because Marquez won in Brno, lost the race in the last lap in Austria.

"In Silverstone was very strong but broke the engine, but he won in Misano in the wet and won here."

LCR Honda rider Cal Crutchlow echoed Rossi's opinion, having predicted from the outset that nobody would be able to challenge Marquez at Aragon.

Asked by Motorsport.com if he felt Marquez now had one hand on the championship trophy, Crutchlow nodded and said: "He's riding strong. I said he would win here and he did.

"He won at Motegi last year [to seal the championship] when he didn't need to win, so maybe he'll win there again as well."