© 2021 Motorsport Network. All rights reserved.
TV Buy tickets Store
Previous / Rins had "no warning at all" about Sachsenring crash Next / Marquez had Austin crash on his mind at the Sachsenring
MotoGP / German GP / Breaking news

Yamaha rider Valentino Rossi says it's "difficult to understand" why he "continued to suffer" in the latest MotoGP race at Sachsenring. 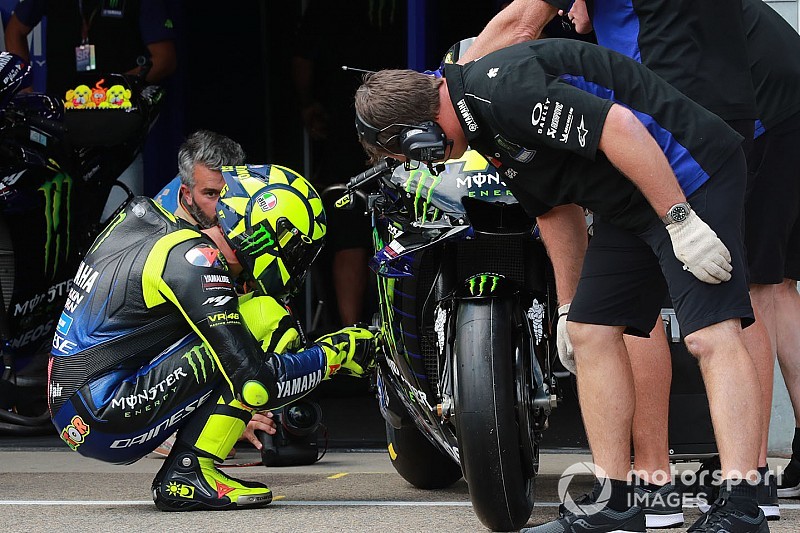 The Italian arrived at the German venue on the back of three successive non-scores and has been struggling to match his fellow Yamaha riders as of late.

While he felt encouraged by his pre-crash showing at Assen and showed flashes of strong pace during the German Grand Prix weekend, Rossi was a muted eighth in the race, some 19 seconds down on race winner Marc Marquez.

"Today I finish but anyway was a very difficult race because I was never strong enough," Rossi said.

"For us this weekend was important because last week in Assen in the race before the mistake I felt good with the bike, I was fast, so we had to confirm if we find the good way here in Sachsenring.

"Unfortunately, during the practice sometimes I have quite good pace, but anyway I was not fast enough. So we suffer, we continue to suffer - and we need to understand why."

Rossi said choosing the medium rear Michelin tyre - as opposed to the hard compound that teammate Maverick Vinales ran on his way to second place - didn't work out for him, but didn't feel it was the overriding factor in his poor showing.

"We start with the medium that we know that was a little bit slower, but we expect [it to be] more constant, especially because from the Michelin side [and] from our calculation, looks like the hard don't arrive at the end," he said.

"So we try the medium but unfortunately the medium don't have grip from the beginning and anyway at the end I was a lot in trouble.

"But apart from the tyre, I think that we have some other problem, because I am not able to be strong, to ride well the bike as I did last year."

Rossi's race time was 20 seconds worse than what he'd recorded en route to second in last year's German GP, while race winner Marquez was only three seconds down on his 2018 win over the same 30-lap distance.

Rossi continued: "Last year these five races [Le Mans to Sachsenring] was the better part of my season, I was always very competitive and I did some podiums, but always good races. But this year, especially in the last four races, we suffer very, very much.

"So we need to analyse the data, we need to understand why, because I don't feel good with the bike and I am a lot slower than me last year, because today I am 20 seconds slower of my race of 2018. So, this is very difficult to understand, we need to find a way."

Rins had "no warning at all" about Sachsenring crash

Marquez had Austin crash on his mind at the Sachsenring