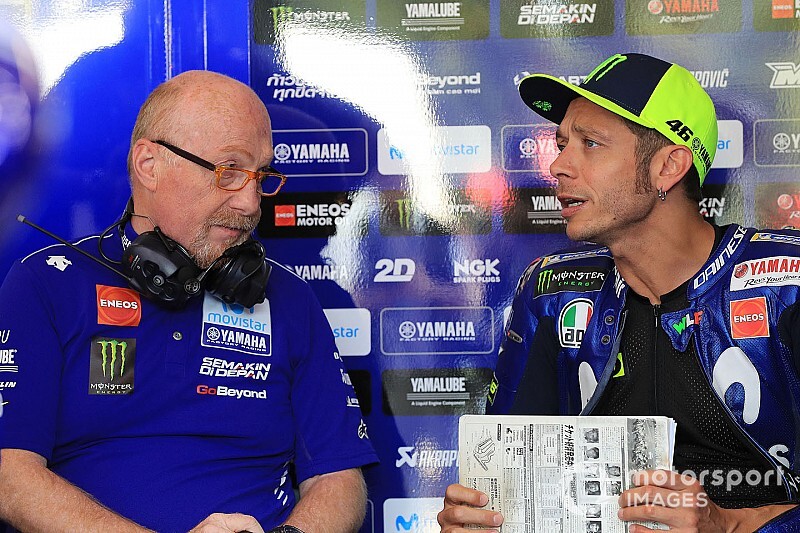 Speaking ahead of the Thai Grand Prix, Rossi confirmed that Galbusera would be stepping aside at the end of 2020, giving up his role as Rossi's crew chief to work with the Yamaha test team instead.

"After the Misano race, we spoke together with Silvano, because we wanted to try to do something to be stronger," Rossi said.

"Silvano wanted to continue to work for Yamaha, but also he wanted to try something with a bit less stress and with less days out of Italy. At the same time, also Yamaha wanted to try to make the test team stronger for next year, to improve the work in Europe.

"Sincerely, I didn't expect [it] in the beginning, but speaking together we decided to change, so Silvano will go to the test team next year, and I will have another chief mechanic, that is coming from our team in Moto2.

"I know him very well, I follow the team very well and last year he did a very good job with Pecco [Bagnaia]. I like the way that he managed at the end of the season, when there was a lot of pressure and Pecco was a little bit nervous to lose the championship with [Miguel] Oliveira."

Rossi is winless since the 2017 race at Assen, and has managed just two podium appearances this season - fewer than both factory teammate Maverick Vinales and Petronas Yamaha rookie star Fabio Quartararo.

The Italian admitted he and Galbusera have been "a little bit stuck", and hoped new arrival Munoz can bring fresh ideas and make an impact despite his lack of prior MotoGP experience.

Galbusera, for his part, looks likely to be working with KTM outcast Johann Zarco next year, with Yamaha team boss Lin Jarvis having confirmed that the manufacturer has made an offer to Zarco.

Galbusera had worked with Rossi since 2014, after the seven-time MotoGP champion had split with long-time crew chief Jeremy Burgess.

"It was different with Jeremy, it was much more difficult, also because we had really been together for 15 years," Rossi recalled. "It seemed to me that he didn't have much motivation anymore and I saw him a little tired.

"It's different with Silvano, but it's always difficult because, in addition to the professional relationship, after many years you also get attached [to one another].

"But I know he'll cheer for us even if he works with the test team."