Rossi: I did nothing wrong at last corner 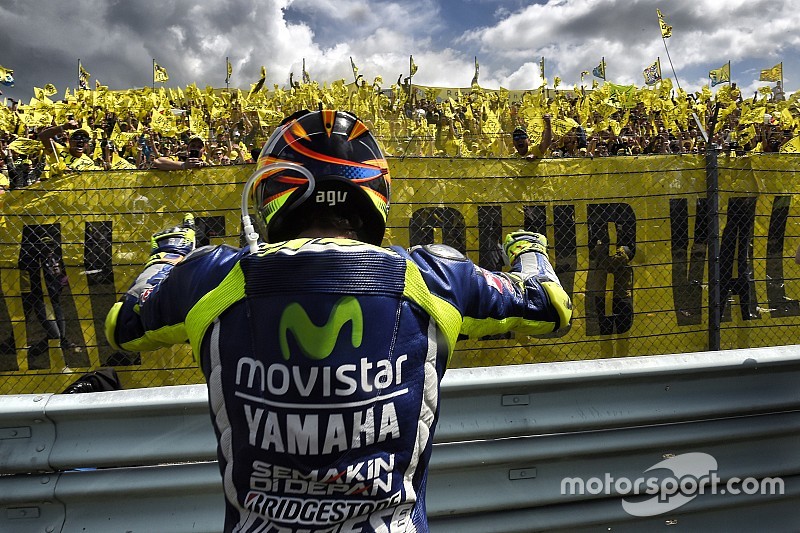 MotoGP legend Valentino Rossi says he deserved his Assen TT MotoGP victory on Saturday, and refuted suggestions that he did anything wrong by straightlining the last corner after Marc Marquez’s late attack.

Yamaha star Rossi scored his ninth victory at Assen from 111 across all classes, his 85th at the premier level.

But his last-corner clash with Marquez had the Spaniard fuming.

“I tried to give the maximum, because I know at the end the race would be decided at the last moment,” said Rossi. “I did a fantastic penultimate lap, and I took some advantage. On the last lap I was good, but Marquez was able to recover.

“In the last chicane I brake hard and I enter, and after he came to me, but unfortunately I was already in the chicane and he pushed me to the outside, so I had to cut.

“Fortunately on the gravel I was able to keep control, I have very good experience in races on the gravel! And I won.”

Rossi emphasised how important his win was, as it not only extended his points lead in the championship over teammate Jorge Lorenzo to 10 points, but it showed that he could dominate a weekend.

“This one was important because I was competitive all weekend and started from pole position,” he added. “I push a lot through all [through] the race, my pace was very strong, but Marquez came with me.

“I know with him it’s always difficult on the last lap.

“So 25 points are very important but especially a great victory here in Assen."

Marquez was uphappy with what transpired at the final chicane on the last lap, and believes he was the moral victor of the race.

“I think I did a race good enough to win, but OK the last corner – I think everybody saw what happened,” he said.

“I go in to make the corner, like I did, but Valentino has a lot of experience. He goes in faster, we touch and then he cut the corner. OK, I think I did the action to win the race, but in the end if Valentino won, I accept, but I know that I did a great race.

Marquez too was delighted with his pace throughout the weekend, as reverting to his 2014-spec Honda has propelled him back to the front of the pack.

“Finally again I have the confidence, we worked hard all weekend,” he added. “In the warm-up we found something to be really fast, so I could stay with Valentino. I’m happy for that.”