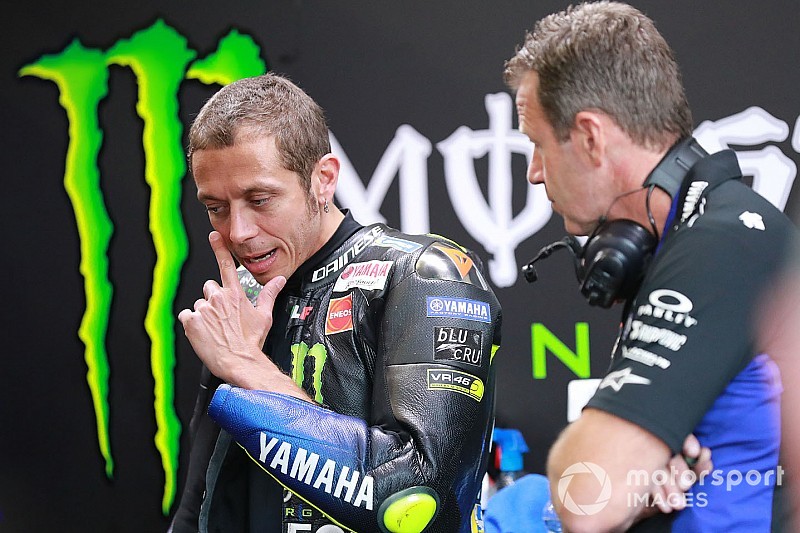 Yamaha MotoGP rider Valentino Rossi has apologised for taking out LCR Honda's Takaaki Nakagami in the Dutch TT, the Italian admitting the crash was "my mistake".

Rossi was challenging Nakagami for 10th place at the fast Turn 8 right-hander on the fifth lap, but hit the deck as he lunged down the inside.

He collected Nakagami in the process, both going off into the gravel at speed, with the Japanese rider then taken to the medical centre for a check-up.

"I tried to overtake Nakagami in the entry of the Turn 8, but I was a little bit too much out of the line maybe, because when I entry I lose the front and unfortunately I take also Nakagami," Rossi explained.

"So I have to say sorry because it's my mistake. And was also a quite big crash, I'm okay fortunately, I know also that Taka is good, so this is important."

Nakagami's LCR team confirmed in the aftermath that the Japanese rider escaped any fractures in the accident, and that he had simply been dazed after hitting his head.

Summing up his race, which ended with his third consecutive grand prix crash, Rossi said: "It's a great shame because was a difficult weekend, where I had also some unlucky [moments], but the bigger problem is that I was quite slow, not fast enough."

Rossi felt that his track limits infringement in FP3, which wiped out his fastest lap and denied him a place directly in Q2, was the key moment in his unravelling Dutch TT weekend.

"For me the bigger problem is that I did the fifth[-fastest] time for the Q2, but I take the green [zone], and I have to go into Q1.

"Also a little bit of unlucky. But everything started because I'm not fast.

"So we have to find something because usually in this track I'm always good, but I don't feel good with the bike, I don't ride well."

He did, however, say that his team "modified something in the bike" that made him stronger in the race.

"It's good to have Sachsenring next weekend, because looks like we find something to be a bit more competitive, so we will see next weekend in Germany."