Rossi "very uncomfortable" in the dry in Valencia 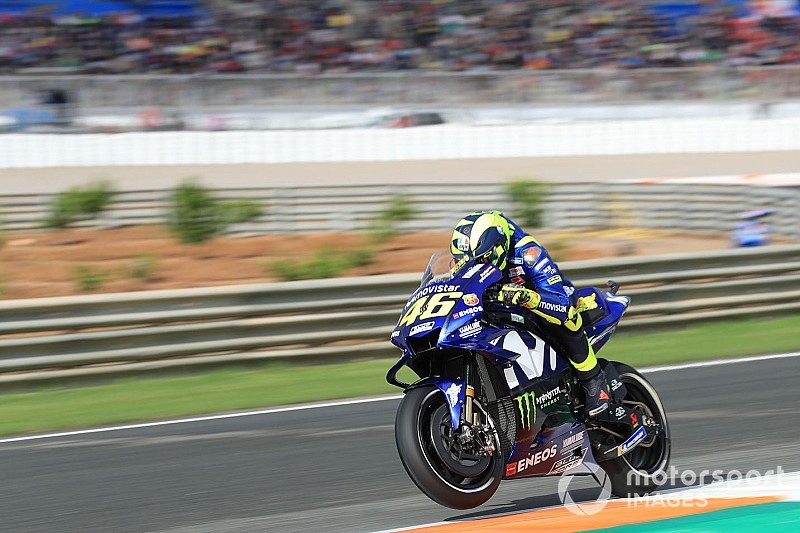 Valentino Rossi says he was "very uncomfortable" riding the Yamaha MotoGP bike in the dry this weekend in Valencia, en route to 16th on the grid for Sunday's race.

Rossi missed out on an automatic Q2 spot after he only took 13th place in FP3 - in which he also had a highside crash.

He was then a lowly 22nd in FP4, the first dry practice of the weekend, and couldn't advance from a Q1 session which also included works teammate Maverick Vinales, Jorge Lorenzo and Andrea Iannone.

Rossi admitted that he had some pain in his left shoulder due to his FP3 crash, but his qualifying struggles were ultimately down to not mastering the conditions.

"Was a very difficult day for me, very tough because after the practice of yesterday in the wet I was quite optimistic to be strong because I feel good but this morning in the FP3 that was important, I was not fast," Rossi explained.

"I try to push at the beginning but I crash. Apart from that, after, I take the other bike but I don't have the pace, enough feeling, for go in the top 10.

"We modify something for the afternoon but at the same time the conditions are different, coming dry, but in reality in FP4 and in the afternoon I never have a good feeling with the bike.

"I feel very uncomfortable, I can't push and I was quite slow. For tomorrow I have to start from very behind so will be hard.

"The hit was big because I crash from very high and I put the ice because I have some pain, I take some painkillers but for riding is not a problem."

Rossi said braking was the main issue with his Yamaha on Saturday.

"For me, a lot in trouble in braking I never stop, I have a front lock so I arrive always too fast in the corner but also in acceleration I don't have a lot of grip so very difficult to ride. I try but I was not fast enough."

He is only two points ahead of Vinales in the fight for third in the standings but, with his teammate starting from pole, Rossi is pessimistic about his chances.

"Unfortunately for me Maverick is on pole position, we have just two points, so [it] is difficult."

Marquez overcame crash pain to "save" his qualifying