Rossi: My Italian GP "one of the worst for a long time"

Yamaha rider Valentino Rossi says the 2019 edition of his home MotoGP race at Mugello was "one of the worst for a long time" for him after he crashed out of 21st place. 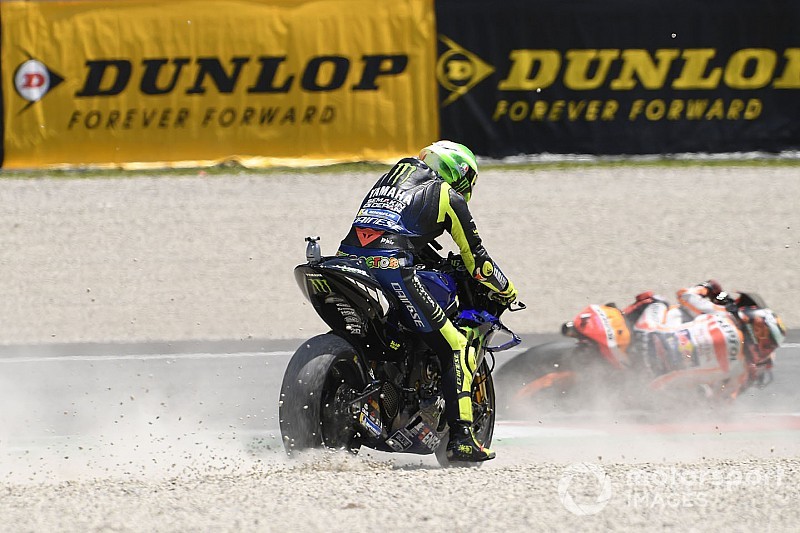 Rossi struggled immensely throughout the whole weekend, a mistake in FP3 leaving him in Q1 on Saturday, where he only qualified 18th.

He made little progress in the race before making contact with Suzuki's Joan Mir on lap five and running through the gravel at Turn 4, dropping to the back of the field.

Rossi then crashed three laps later at Arrabbiata 2, to record his first retirement of the season.

"Is very difficult weekend, one of the worst for a long time because we are never fast," Rossi said.

"We arrive here knowing that it is difficult, but we expect to be strong here in Mugello. But unfortunately was not like this and in all the practice [I] was not so fast.

"In the race, starting from behind is always difficult, also because my pace was not fantastic.

"I lose everything when I have contact with Mir because I try to overtake but we touch and we go out and after I also crash in Arrabbiata 2 but anyway was very difficult.

"I was not fast, so in general a very difficult weekend - especially because we are quite slow and looks like we struggle especially in the race when we have to ride with other bikes.

"We are not fast in the straight but also in acceleration so a race like this is very difficult. We have to try to do something."

While Yamaha's top speed deficit was apparent throughout the weekend, Rossi said he was suffering "everywhere from the start".

"Also the other Yamahas that are in the first two rows, arrive to the first corner that they already lose six or seven places," he added.

"This is the bigger difference, really a problem. Also from acceleration, from one corner to the other we suffer.

"Is not just top speed, but is also acceleration and now the gap is quite big."

Rossi added that the previous round Le Mans was also a "big mess", as a mistake-free race was only good enough for fifth.

"In Le Mans [qualifying] we did the magic of the slick in Q1 and also the Q2 was wet and usually the wet I am fast so I am able to start fifth.

"I did a race without making any mistake, always in the slipstream, and I finish fifth."

Petrucci "so sorry" to hamper Dovizioso in race-winning move