Rossi: "If Pedrosa is angry, he should race alone" 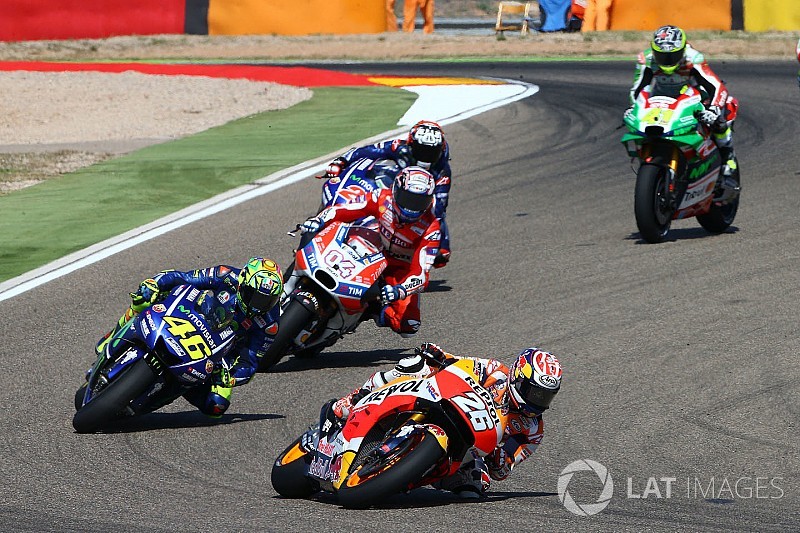 Valentino Rossi has shrugged off MotoGP rival Dani Pedrosa's complaints over what the Spaniard considered to be 'unfair' defending during the Aragon Grand Prix.

Honda rider Pedrosa, who overtook Rossi en route to a second-place finish, was annoyed to have been squeezed to the left side of the track while passing the Yamaha man on the back straight.

Despite having successfully completed the move, he labelled Rossi's defending 'unfair', adding: “You can go to the left but to go to the line, and make the other guy go off the track at 300km/h, it’s not the best thing.”

When the comments were put to Rossi, however, the Italian argued Pedrosa had no ground to stand on.

“Because everybody make the same to me when I want to overtake, especially on the last lap. But sincerely exit of [Turn] 14, you always go to the left.

“Maybe I go one metre more... so, I don't know, maybe these riders think that they own the track.”

Rossi, making an earlier-than-expected return to MotoGP track action this weekend after his leg-breaking training accident just over three weeks ago, spent much of the race in the leading group, having qualified on the front row.

“I tried the maximum for the best result but at the end I was tired - but sincerely I never thought I could arrive in the top five, and I feel quite good,” Rossi said.

“I'm very proud, I'm very happy because one week ago I don't know if I'm able to race.

“But we work well, we did the right choice, maybe also risking a bit. But I wanted to try to not lose another race because the more races you lose, the more time you need to come back at your level.”

Rossi says he was held back by his injury, as he felt “more tired than normal” - but he reckons his late-race pace also suffered because of a specific weakness of the Yamaha bike.

“For me, we are quite competitive. But unfortunately we still suffer too much the degradation of the rear tyre," he admitted.

“I think that if I am fully fit, I could arrive earlier on the flag, some seconds earlier. But anyway the second half of the race for us is a problem.

“At this moment, Ducati and Honda are better. We have to work.”

Marquez had to “fight” bike to score Aragon win

Five reasons why MotoGP at Phillip Island is a must-see