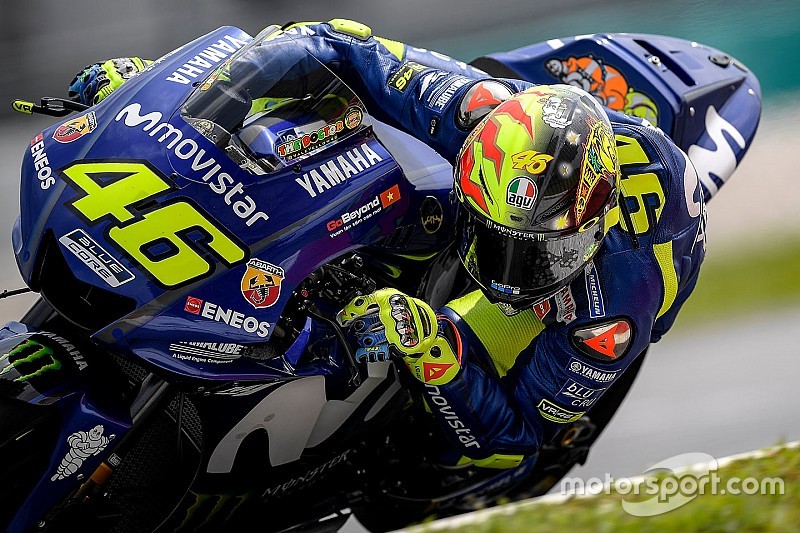 Valentino Rossi admitted his Yamaha team was left worried by a muted showing on the final day of MotoGP's first 2018 pre-season test at Sepang.

Rossi was second - 0.035s behind pace-setting teammate Maverick Vinales - on Monday, but could not match that pace on the following day, finishing six tenths in arrears in eighth place.

He admitted he had expected to be able to improve the laptime and likened the situation to last year's post-season test in Valencia – when the team was left puzzled after two “totally different” test days.

“Yesterday night I was optimistic to improve the laptime, but was impossible, was a bit more difficult - especially with the new tyre, because with the used tyre my pace was good.

“We are a little bit worried, we need to understand why, because in Valencia test after the last race happen exactly the same.

“On Tuesday me and also Maverick have a good feeling with the bike and with the tyres. Our pace was [1m]30.5[s], for example, and our position was third and fourth.

“Today happened a little bit the same, so we need to understand why.”

Vinales, who finished the day 18th and 1.7s off the pace, likewise conceded the result was not what he wanted to see.

“Yesterday was much better,” he said. “I felt better with the track.

“Today it changed a bit, especially at mid-day. Maybe the pace was not as expected, I expected more from this third day. But we worked hard and we completed a lot of laps.”

Despite being underwhelmed by single-lap pace, Rossi nonetheless described Tuesday as “a good day”.

He added: “For me the bigger improvement is my feeling with the bike, because I am good to ride, I feel comfortable, and also the pace - compared to last year I improve a lot because last year I suffer more the degradation of the tyre.

“In this test, at the end, in the fastest lap I am not so far, but the position is not fantastic, but my pace is very good.”

He also reckoned that, on evidence from the first three days of testing, MotoGP could be in for Moto3-like close competition once the season kicks off in earnest.

“I want to study the rhythm, but what I said is that six, seven, maybe eight riders have more or less the same pace - if the race start tomorrow, maybe you could have a Moto3 race,” he quipped.

“This is important, can be fun, also because anyway we are in the top group, but we know that we have to work, we have to improve.”

Zarco to revert to 2016 Yamaha chassis for Thailand test