Marc Marquez topped a morning warm-up session held on a drying Sachsenring track ahead of his bid for a seventh successive victory in MotoGP's German Grand Prix. 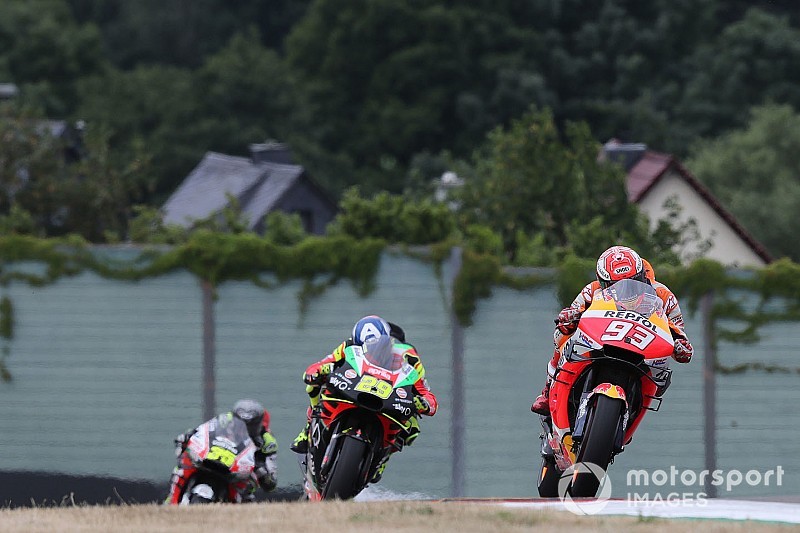 Overnight rain meant most of the field opted for wet tyres for their opening runs, although some riders ventured out on slicks as the 20-minute session neared its halfway point.

With eight minutes remaining, Francesco Bagnaia went fastest aboard the Pramac Ducati equipped with slicks front and rear, dislodging Maverick Vinales from the top of the times.

That prompted more riders to try their luck on dry-weather rubber, but it wasn't until the final minute that Bagnaia - who had posted a series of improvements in the meantime - was finally bested, as Vinales posted a 1m24.476s aboard his factory Yamaha.

Vinales' reign at the top was short-lived however as he was immediately displaced by Repsol Honda stand-in Stefan Bradl on a 1m23.349s, and then Marquez on a 1m23.116s.

Bagnaia's Pramac teammate Jack Miller jumped to second at the chequered flag with a time just 0.190s shy of Marquez, while Andrea Dovizioso put the best of the works Ducatis in third with a last-ditch improvement to also move ahead of Bagnaia.

Bradl, deputising for the injured Jorge Lorenzo, was fifth, followed by Danilo Petrucci, who had earlier had a low-speed collision with fellow Ducati rider Tito Rabat at Turn 1.

Best of the Yamahas was Fabio Quartararo in seventh as Vinales slumped to 10th, behind the KTMs of Miguel Oliveira and Pol Espargaro.

The only crasher of the session was KTM rider Johann Zarco at the Turn 11 downhill right-hander, although the Frenchman walked away unscathed.

Joan Mir's session was interrupted by his Suzuki stopping out on circuit, but he was able to get back to the pits and set the 12th-fastest time, ahead of Valentino Rossi (Yamaha).

Sachsenring MotoGP - the race as it happened