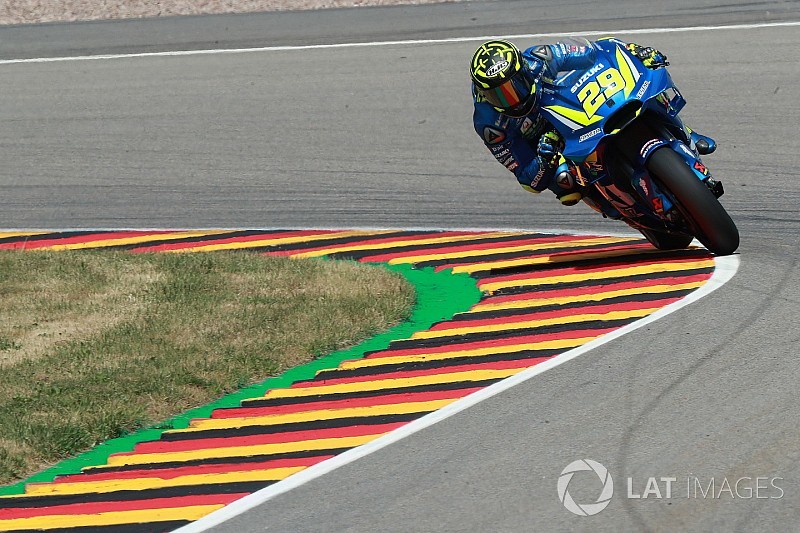 Suzuki MotoGP rider Andrea Iannone set the pace in third practice at the Sachsenring as Andrea Dovizioso and Johann Zarco both failed to automatically qualify to Q2.

Marc Marquez, who was fifth after Friday despite not putting on a new rear tyre at the end of FP2, was the early pace-setter in FP3 with a 1m21.263s lap.

The Honda rider led Valentino Rossi for the majority of the session until Iannone became the first rider to beat Jorge Lorenzo's FP2 benchmark with a 1m20.845s.

Iannone only held first place for a few minutes when Danilo Petrucci edged ahead with Marquez and Alvaro Bautista then both temporarily taking over at the top.

However, in the end, both Petrucci and then Iannone fought back, with the latter topping the session with a time of 1m20.438s set in the final minute of the session.

Petrucci was 0.099s adrift in second with Cal Crutchlow and Rossi leading Honda's and Yamaha's efforts in third and fourth respectively.

Nieto Ducati's Bautista was an impressive fifth as Marquez ended up sixth, his last flyer compromised by the Aprilia of Aleix Espargaro.

Maverick Vinales took seventh with FP2 pace-setter Lorenzo dropping down to eighth, ahead of Alex Rins on the second Suzuki.

Dani Pedrosa (Honda) was the last rider to make it to Q2 in 10th, edging out factory Ducati rider Dovizioso by half a tenth.

Espargaro led Aprilia's efforts in 12th, with Bradley Smith ending up as the top KTM in 14th, ahead of Zarco on the Tech 3 Yamaha.

Stefan Bradl, who is replacing the injured Franco Morbidelli at Marc VDS Honda this weekend, was 20th, beating his Marc VDS teammate Tom Luthi by 0.168s.